Arsenal will be looking to climb into the top four when they take on Southampton at St Mary’s on Thursday afternoon. Here is the side we think Wenger will pick

Arsenal will be looking to climb into the top four when they take on Southampton at St Mary’s on Thursday afternoon. Here is the side Gooner Mac thinks Arsene Wenger will select:

Goalkeeper: Wojciech Szczesny was excellent against West Ham and I see no reason to change things between the sticks for this game.

Defence: Laurent Koscielny returned to action with a resolute display at Upton Park and he doesn’t appear to have suffered any ill-effect with his calf or Achilles so he should start alongside Per Mertesacker at the back. Kieran Gibbs was rested last time out so I’d expect him to come back in for Nacho Monreal at left-back while Mathieu Debuchy is likely to start at right-back before being rested for the FA Cup game against Hull on Sunday.

Midfield: Arsene has very few options to rotate in the middle of the park as Mikel Arteta, Jack Wilshere and Aaron Ramsey all remain unavailable through injury. Francis Coquelin made a rare start against the Hammers and I wouldn’t be surprised if he retained his place alongside Mathieu Flamini. Arsene has confirmed that Tomas Rosicky will come back into the side having been rested on Sunday.

Attack: Theo Walcott is pushing for a recall but I think we’ll see him off the bench with Alex Oxlade-Chamberlain starting on the right. Olivier Giroud is still suspended and Danny Welbeck is a doubt after picking up a thigh problem but I think the former Man Utd forward will be passed fit to start and then be rested on Sunday, so he should join Alexis Sanchez and Santi Cazorla in attack. 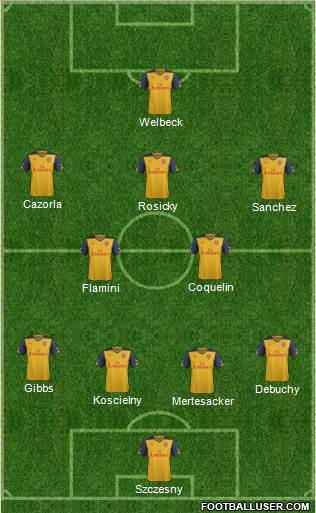