The Gunners were this weekend’s stand-out performers as they moved up to second in the table with a resounding 4-1 victory over Liverpool on Saturday lunchtime.

Hector Bellerin opened the scoring with a fine effort and his overall score of 8.05 is enough to see him named in the best-performing back-four of gameweek 31.

Mesut Ozil was in excellent form once again as he curled home a superb free-kick to double Arsenal’s lead and his score of 8.82 makes him one of the league’s top performers this weekend.

The third Arsenal player to make the cut is Olivier Giroud as the striker continued his red-hot form in front of goal after sealing the win with a late fourth goal against Liverpool and his score of 8.94 made him the highest scoring striker this week.

Man Utd were also in good form this weekend with Daley Blind putting in an excellent shift at-left-back to book his place in the team of the week alongside Ander Herrera – who scored twice in a 3-1 win over Aston Villa at Old Trafford.

Eden Hazard was the key player again for Chelsea as they ground-out a 2-1 victory over Stoke on Saturday evening to maintain their seven-point advantage at the top of the league and the Belgian not only makes the TOTW but he registered the highest overall score with a perfect 10 for his display at Stamford Bridge.

Here is the WhoScored Team of the Week for the latest round of Premier League fixtures: 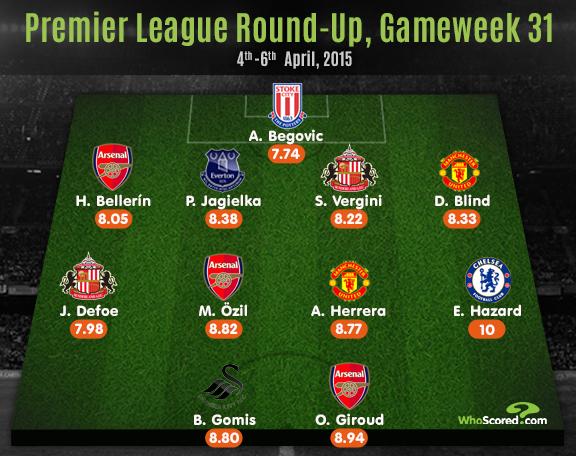