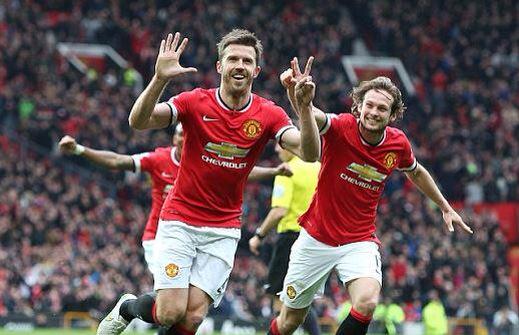 Manchester United will look to continue their excellent recent run when they take on Chelsea at Stamford Bridge on Saturday evening.

Ahead of the game, Louis van Gaal has been speaking to the media at his pre-match press conference this afternoon and given ManUtd.com a team news and injury update.

Unfortunately, the United boss revealed a quadruple injury blow with Michael Carrick, Marcos Rojo, Phil Jones and Daley Blind all ruled out of the trip to West London.

Carrick picked up an injury during the second half of United’s 4-2 victory over Manchester City last weekend and he’s failed to recover in time while van Gaal also claimed that Blind is out after picking up an injury following a nasty challenge from Vincent Kompany last week.

Jones was forced off during the closing stages of the game at Old Trafford while Rojo also appears to have picked up an injury against City, so United have some serious problems in defence.

However, there was some positive news as Luke Shaw is fit and available after recovering from a hamstring injury that he picked up during last months FA Cup defeat to Arsenal so he should return at left-back, while United may have to rush van Persie back despite the striker only returning to training recently.

“Carrick is injured, he cannot play. But not only Michael Carrick – Daley Blind, Phil Jones and Marcos Rojo cannot play.

“It cannot be worse because it’s two players in the left central defensive positions, and Jonny Evans is still suspended. Daley Blind and Michael Carrick play in the holding position in midfield, so I have to change my line-up a lot against Chelsea.”

“They are all from the game against Manchester City. Blind has played on because he always wants to play on, but the tackle from [Vincent] Kompany was of course the reason.

“Jones, I took him off the pitch already because he injured himself in the second half. Rojo, he was complaining after the match, and Carrick was also off. So it’s not surprising for me, but we had a big hope that Blind and Jones could reach this game but they could not.”

“Shaw has trained for a lot of weeks already so he can play. Van Persie is another story. This is the first week he has trained with us, with the first team, but maybe we have to think about him.”

This news is a major blow to United as with Jonny Evans also still serving his six-game suspension, it leaves them extremely short of options at the back and it looks like youngster Paddy McNair is going to be drafted in alongside Chris Smalling in central defence.

With both Carrick and Blind out, van Gaal may be forced to drop Wayne Rooney back into a deeper midfield role with van Persie potentially returning to start up front.

United head to the Bridge sitting third in the Premier League table but with Chelsea eight points clear with a game in hand, van Gaal knows only a win would keep alive their slim hopes of challenging for the title.