There is a heavy Premier League presence once again after Vicente Del Bosque named his latest Spain squad for their upcoming international double-header.

There is a heavy Premier League presence once again after Vicente Del Bosque named his latest Spain squad for their upcoming international double-header.

Unsurprisingly, Manchester United’s Player of the Season David De Gea is one of three goalkeepers to be called up to the 24-man squad, but it will be interesting to see if he starts ahead of Real Madrid legend Iker Casillas.

However, there is no place in the squad for United attackers Ander Herrera and Juan Mata as Del Bosque has opted to give Sevilla youngsters Aleix Vidal and Vitolo a shot on the international stage.

Arsenal midfielder Santi Cazorla does make the cut after an impressive campaign in North London while Chelsea playmaker Cesc Fabregas is also included after lifting the title in his first year at Stamford Bridge.

But there was no place for team-mate Diego Costa as the striker has been left-out after only recently returning to action following a niggling hamstring injury.

Manchester City attacker David Silva is the fourth and final Premier League representative to be named in the Spain squad – which is once again dominated by players from Barcelona and Real Madrid.

Spain take on Costa Rica in a friendly on June 11 before taking on Belarus in their Euro 2016 qualifier three days later. Here is the 24-man squad announced today: 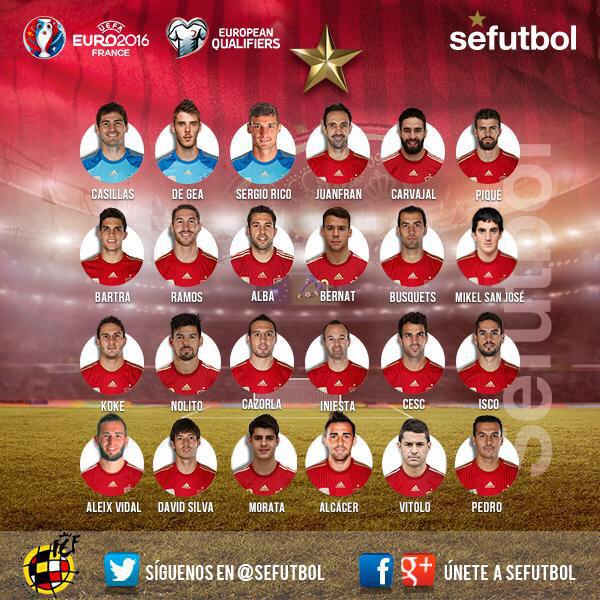