As the opening of the summer transfer window approaches, managers are working hard identifying targets and lining-up potential deals so we’ll bring you all the news and gossip. Today, Liverpool’s Raheem Sterling is tempted by a move to Man Utd…. 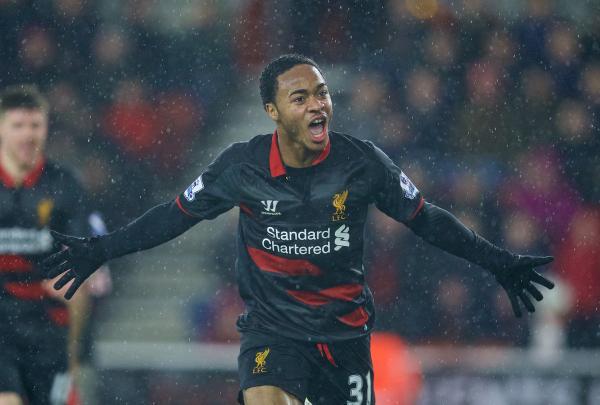 Liverpool winger Raheem Sterling is open to the idea of making a controversial move to Manchester United this summer as Louis van Gaal gets set to open the bidding with a £25m offer, according to the Guardian.

Sterling’s future at Liverpool has come under question in recent months after he broke off contract extension talks and his agent was quoted in the media as saying his client has no intention of signing a new deal at Anfield.

This uncertainty led to interest from a number of clubs throughout Europe with the likes of Arsenal, Chelsea, Manchester City, Manchester United, Bayern Munich and Real Madrid all thought to be keeping a close eye on his situation.

Previous reports claimed that Sterling’s preferred option would be to return back to London where he grew up as a child with Arsenal touted as the most likely destination with rumours suggesting Liverpool have already held talks about a possible swap deal involving Theo Walcott and maybe even Kieran Gibbs.

However, it seems United aren’t out of the running just yet as the Guardian are reporting this evening that Sterling is now giving serious consideration to the idea of moving to Old Trafford this summer.

The report comes shortly after the Mirror claimed that United were set to start the bidding with an opening £25m offer, and while that bid will almost certainly be rejected, it seems it’s done enough to turn Sterling’s head to making a controversial move to Liverpool’s greatest rivals.

The Guardian suggest that the 20-year-old is concerned about the reaction from Liverpool fans if he was to join United but he’s still keen to explore the idea of playing under Louis van Gaal.

It would certainly cause uproar if Sterling was to make the switch as no player has moved directly between the two clubs since 1964 and many fans will still remember the lengths United took to prevent Gabriel Heinze joining Liverpool back in 2007 – something I’m sure the Anfield hierarchy won’t have forgotten.

I personally don’t think there’s a chance Liverpool would even contemplate selling one of their best talents to United as it would create further divide between the club, the manager and the fan-base at a time when supporters are split over the best way forward for the club.

Brendan Rodgers is under a lot of pressure after a disappointing campaign so can you imagine the response from the fans if he was to allow Sterling to join United?

Therefore, I still think that if Sterling is to leave Anfield this summer he’ll more than likely move back to London which means Arsenal, and possibly Chelsea, remains in pole position.

However, I can see Liverpool demanding somewhere in the region of £50m to sell to another Premier League club, so we’ll have to wait and see if anyone is prepared to match that kind of figure.