Dutch starlet Bobby Adekayne is set to undergo a medical at Liverpool on Wednesday ahead of a free transfer move from Barcelona, according to the Liverpool Echo

As the summer transfer window gets set to open for business, managers are working hard identifying targets and lining-up potential deals so we’ll bring you all the news and gossip. Today, Liverpool are set to snap-up a highly-rated Barcelona youngster…. 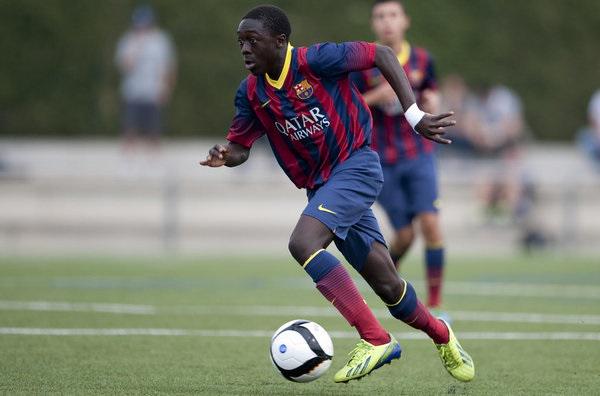 Dutch starlet Bobby Adekayne is set to undergo a medical at Liverpool on Wednesday ahead of a free transfer move from Barcelona, according to the Liverpool Echo.

Adekayne joined Barca from Ajax in 2011 when he was just 12-years-old but the move was deemed illegal by FIFA and was one of the reasons the Spanish giants were slapped with a transfer ban by the governing body after being found guilty of illegally recruiting youngsters to their La Masia Academy.

The 16-year-old was subsequently banned from taking part in competitive games for the Catalan side so he spent last season out on loan with PSV Eindhoven, where he impressed  with the Dutch outfit.

The Liverpool Echo claim that Barcelona had hoped Adekayne would remain in Holland until their dispute with FIFA was resolved but the youngster has decided to cut his ties with the Spanish giants and it appears he could now be heading for England.

The newspaper suggest that despite interest from PSV and Ajax, Adekayne has opted to join Liverpool and will fly into Merseyside to undergo his medical at Melwood on Wednesday before sealing a free transfer move to Anfield.

The youngster is highly unlikely to be part of Brendan Rodgers’ first team squad just yet so will continue his development in the Kirkby Academy and make his way through the youth teams before being considered for the senior squad.

Adekayne was born in Nigeria but moved to Amsterdam at the age of four and he decided to represent Holland at youth level, with the winger catching the eye at the Algarve Cup back in February when he played for the Holland U-16’s against the likes of Spain, Portugal and Germany.

So it looks like Liverpool have taken advantage of Barcelona’s transfer ban to snap-up one of their most highly-rated young attackers, as long as everything goes smoothly with his proposed medical tomorrow.

The gifted young attacker is left-footed so is predominantly played from the left wing but he’s more than capable of playing anywhere across the attack. I’m sure Rodgers and his coaching staff will asses his talents over the coming months before deciding on his best position.