Manchester United will be hoping to put one foot in the group stages of the Champions League when they take on Club Brugge in the first leg of their play-off clash at Old Trafford tonight.

United missed out on Champions League football for the first time in 19 years last season but they will return to the top tier of European football if they can overcome Brugge in a two-legged play off.

Louis van Gaal’s side may not be firing on all cylinders just yet but they’ve still started the new Premier League season with consecutive 1-0 victories over Tottenham and Aston Villa so they should head into tonight’s game in confident mood.

Brugge booked their place in the final play-off round after beating Panathinaikos 4-2 in the third qualifying stage – which they reached after winning the Belgian Pro League last season – so they could prove to be tricky opposition.

United will continue to be without the services of David De Gea as van Gaal still refuses to pick him while his future at the club remain uncertain, so Sergio Romero is set to keep his place in goal.

Phil Jones is still out with thrombosis while Marcos Rojo is still not fully match fit following his late arrival to pre-season training, so Daley Blind should continue alongside Chris Smalling at the back.

Michael Carrick is unlikely to play two games in four days so Bastian Schweinsteiger could come in to the midfield while Ander Herrera is also pushing for a start. Marouane Felleini returns from suspension but is unlikely to start. 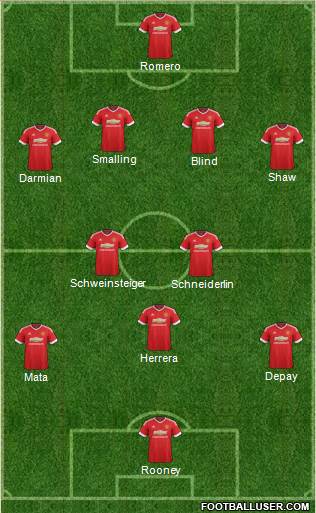 Manchester United 2-0 Club Brugge: United weren’t at their best against Villa on Friday night but they still managed to grind out the win. Brugge should pose a threat but I still think the home side will ease to a 2-0 victory and put themselves in great shape to reach the group stages.

Manchester United are the 4/11 favourites but Football-Talk can get new customers enhanced odds of 4/1 on United winning the game. My prediction of 2-0 win is available at odds of 11/2, and I also like the look of Wayne Rooney to open the scoring at odds of 16/5 – despite his disappointing start to the season. If we combine that with a 2-0 win in a score-cast, then we get very tempting odds of 12/1.