Arsenal will look to go top of the Premier League when they take on Everton at the Emirates on Saturday. Here is the side we think Arsene Wenger will select.

Arsenal will look to go top of the Premier League when they take on Everton at the Emirates on Saturday evening. Here is the side Gooner Mac thinks Arsene Wenger will select for the game:

Goalkeeper: Petr Cech was in excellent form against Bayern Munich on Tuesday night and the Czech international is certain to keep his place in the side as David Ospina has been ruled out for a month with a shoulder injury.

Defence: Gabriel Paulista missed the Champions League game in midweek through illness and Arsene hasn’t given any indication if the Brazilian international will return to the squad this weekend but I’d expect the boss to stick with Per Mertesacker alongside Laurent Koscielny at the back in any case.

Hector Bellerin should retain his place at right-back while Nacho Monreal is expected to keep his place ahead of Kieran Gibbs on the left side of the defence after both were excellent in midweek.

Midfield: Francis Coquelin should continue in the holding role alongside Santi Cazorla after another impressive performance last time out. Mikel Arteta and Mathieu Flamini are likely to continue on the bench but Jack Wilshere remains unavailable following surgery.

Attack: Aaron Ramsey has been ruled out until after the next international break after suffering a hamstring injury on Tuesday night so the boss is going to have to make at least one change to his attack.

Wenger also dropped a huge hint that Alexis Sanchez is in need of a rest after saying the Chilean international is ‘exhausted’ so we could see him given a breather. If so, I think we could see Alex Oxlade-Chamberlain come in on the left with Theo Walcott dropping back to the right wing.

This would allow Olivier Giroud to start up front as the big Frenchman should have played his way in to Wenger’s thoughts after coming off the bench to score a vital goal against Bayern Munich.

If Sanchez isn’t rested, then expect to see Walcott continue up front with The Ox playing on the right-wing. 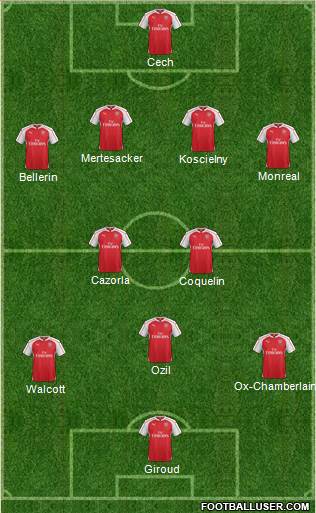