Liverpool will look to secure qualification to the knockout stages of the Europa League when they take on Bordeaux at Anfield tonight.

The Reds go into the game sitting second in Group A on six points after beating Rubin Kazan last time out but with third-placed Bordeaux three points further back, Liverpool know a win will be enough to secure safe passage to the next phase.

The Merseysiders warmed up for the game with a superb 4-1 victory over Manchester City at the Etihad Stadium on Saturday so Jurgen Klopp’s men should be full of confidence.

Bordeaux arrive at Anfield in poor form and sit 13th in the Ligue 1 table but they’ll be hoping to build on the hard fought draw they secured when the two sides met at the Nouveau Stade de Bordeaux back in September.

Liverpool will be without Philippe Coutinho for the game after he suffered a hamstring injury at the weekend but the Brazilian international should be back in contention to face Swansea on Sunday.

Daniel Sturridge is expected to be on the bench and will be hoping to get some minutes under his belt as he continues to build his fitness after a spell on the sidelines.

Mamadou Sakho is still out with a knee injury and with Martin Skrtel set to miss the game through illness, Kolo Toure should partner Dejan Lovren at the back.

Jordan Henderson, Joe Gomez and Danny Ings are all out through injury but Joe Allen should come in for the rested Emre Can while Jordon Ibe could get a run-out in attack. 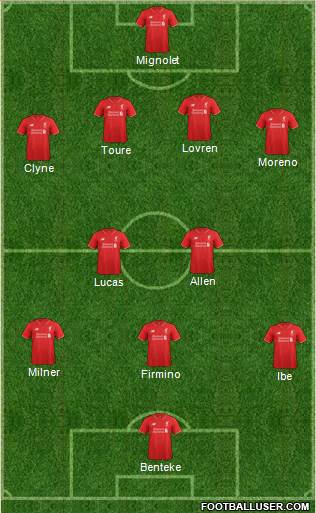 Liverpool 2-0 Bordeaux: The visitors are in poor form this season and Liverpool should be in buoyant mood following their thrashing of Man City so I can only see one winner this evening.

Liverpool are the 4/9 favourites with the bookmakers but Football-Talk can get you enhanced odds of 5/1 on a Reds win if you click here. My prediction of 2-0 is on offer at odds of 5/1 and I also like the look of Benteke opening the score at 10/3. If we combine those two bets in a score-cast, then we get very tempting odds of 12/1.