Arsenal will look to bounce back from their loss at West Brom when they take on Norwich Sunday. Here is the side we think Arsene Wenger will select for the game

Arsenal will look to bounce back from their loss at West Brom when they take on Norwich City at Carrow Road on Sunday afternoon. Here is the side Gooner Mac thinks Arsene Wenger will select for the game:

Defence: We have no fresh injury concerns at the back so I think the boss might stick with the same back four that kept a clean sheet during our 3-0 Champions League victory over Dinamo Zagreb in midweek.

That means Laurent Koscielny alongside Per Mertesacker in the heart of defence with Hector Bellerin and Nacho Monreal once again starting in the full back slots. If Wenger was to make one change it would be Gabriel in for Mertesacker.

Midfield: Aaron Ramsey is back in contention after making a cameo appearance off the bench in midweek so I think we could see the Welshman play alongside Santi Cazorla in midfield this weekend. Francis Coquelin is out for the foreseeable future and Mathieu Flamini put in a solid shift against Zagreb but I’d like to see Ramsey back in the middle.

Attack:  Alex Oxlade-Chamberlain is available again after recovering from a hamstring injury that’s kept him out for a month so he could start on the right wing. That would see Joel Campbell drop to the bench and the Costa Rican would be unlucky to miss out after an impressive display against Zagreb.

Alexis Sanchez has a minor hamstring concern but Arsene appeared confident he’ll be passed fit at his press conference yesterday so I expect him to start alongside Mesut Ozil in attack.

With Theo Walcott and Danny Welbeck still out we have limited options up front so Olivier Giroud will continue to lead the line, despite looking like he could do with a well-earned rest in recent games. 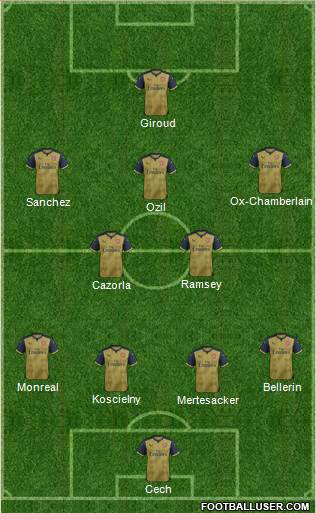