Alexis Sanchez has beaten off competition from David De Gea and Harry Kane to scoop the Football Supporters’ Federation Player of the Year award for 2015.

Arsenal star Alexis Sanchez has beaten off competition from the likes of David De Gea and Harry Kane to scoop the Football Supporters’ Federation Player of the Year award for 2015.

Sanchez has enjoyed an outstanding year with his 20 goals in all competitions helping Arsenal clinch third spot in the Premier League last season while the Gunners are also mounting what looks like a serious title challenge this campaign.

The 26-year-old also scored a stunner in last seasons FA Cup final to help Arsenal retain the trophy while he was instrumental in guiding Chile to the Copa America in the summer.

Sanchez has now capped off a memorable 2015 after beating off competition from Manchester United keeper David De Gea and Tottenham striker Harry Kane to be named as the Football Supporters’ Federation Player of the Year. Jamie Vardy, Sergio Aguero and John Stones were also in the running.

The player is quoted as saying by the Daily Mail:

‘I’m delighted to receive the FSF Player of the year award. Personally, it’s been a great 2015 for me on the pitch with both my club and country.

‘Arsenal have enjoyed a good start to the season and it was disappointing to pick up this injury. But I‘m hoping to be back soon to help my team mates have another successful year.’

Sanchez is currently on the sidelines with a hamstring injury and has been sent back to his native Chile to undergo treatment so he won’t be able to attend the awards ceremony in London tonight.

In his absence, Gunners boss Arsene Wenger will collect the award on his behalf and the Frenchman believes it’s recognition of the impact the player has had in English football. Wenger is quoted as saying by the Daily Mail:

‘Alexis has had a great 2015 – winning the FA Cup with us and the Copa America with Chile.

‘He has made a huge impact on English football since his arrival at the Emirates and I’m very happy that his skill, ability and dedication has been recognised by football fans across the country.’

Here’s a photo of Wenger holding the award for Sanchez…. 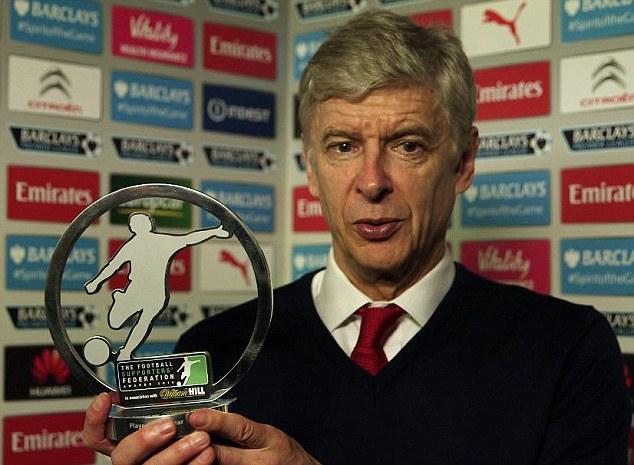