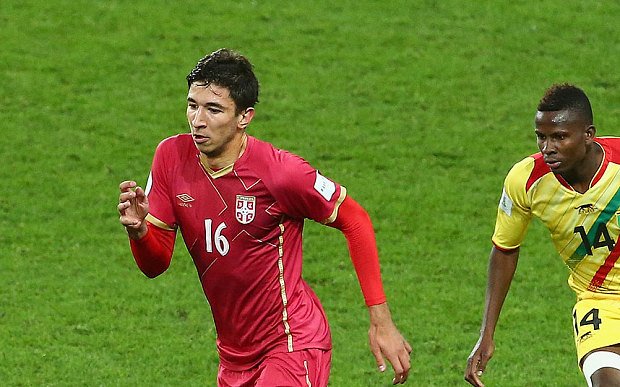 Serbian midfielder Marko Grujic is set to arrive on Merseyside this week to undergo his medical after agreeing terms over a five-year contract ahead of his £5m move to Liverpool in January, according to the Liverpool Echo.

The 19-year-old is considered as one of Serbia’s hottest young talents and he came through the youth ranks at Red Star Belgrade before breaking into the first team set-up at the end of the 2012/13 season.

His potential caught the eye of Liverpool scouts and he’s been strong linked with a move to Anfield in recent weeks with Jurgen Klopp in particular championing his signature.

With Inter Milan also showing a keen interest, the Liverpool Echo claim that chief executive Ian Ayre flew out to Belgrade last week to thrash out a deal while Klopp also spoke personally with Grujic to swing the deal in Liverpool’s favour.

The newspaper states that the Reds have agreed to pay £5m for the talented midfielder’s signature in January but will receive £730,000 back as a loan fee with Grujic set to remain on loan at Belgrade for the rest of the season, while Red Star have also got a 10% sell-on clause inserted into the contract.

The Echo report that Grujic is now due to fly-in to Merseyside this week to undergo his medical after agreeing terms over a five-year deal and is now set to become Klopp’s first signing since taking over at Anfield.

Grujic is a hugely talented central midfielder who looks to have a bright future ahead of him, so I’m sure Liverpool fans will be pleased that they’ve seemingly won the race for his signature.

The teenager has already become a regular with the Serbian Under-21s while he also played a key role in helping Serbia win the FIFA Under-20 World Cup in New Zealand back in June.

Grujic is expected to link-up with his new team mates next summer but he’ll face a real fight to break into the Liverpool first team any time soon as he’ll face stiff competition from the likes of Jordan Henderson, James Milner, Emre Can, Lucas Leiva and Joe Allen for a place in Klopp’s starting eleven.