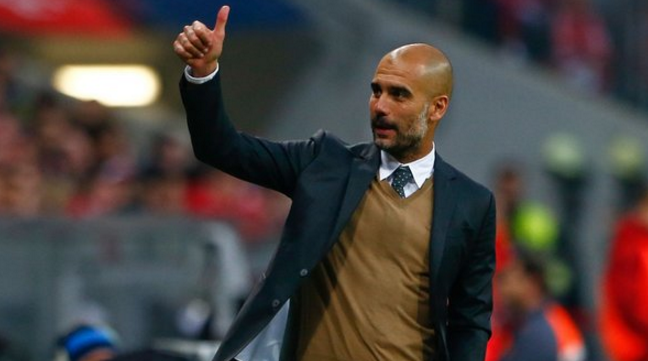 Pep Guardiola would prefer to manage Manchester United over Manchester City after reportedly holding talks with Reds’ officials in a Paris hotel last week, according to the Express.

Guardiola has already confirmed that he’s decided to leave Bayern Munich when his contract expires at the end of the season, bringing to an end a hugely successful three-year stint with the German champions.

The 45-year-old has admitted he wants to try his luck in the Premier League and says he has already had offers from England, but insists nothing has been signed just yet. Earlier this month, Guardiola is quoted as saying by the Express:

“I want to coach in Premier League. That is the reason I did not prolong my [Bayern Munich] contract.

“I have offers from England, but I have not signed a contract yet,” he said.

“When I have a new contract, then we will communicate it. I can’t say more right now. I have not signed a contract yet.”

This admission has understandably led to intense speculation over where Guardiola will end up but he’s been widely tipped to be reunited with Txiki Begiristain and Ferran Soriano at Manchester City after working with the duo during his time at Barcelona.

However, the Express claim that sources close to Guardiola have informed them that the Spaniard would in fact favour a move to Manchester United due to their superior status in world football, despite it being a far more difficult rebuilding job at Old Trafford compared to City.

This news comes shortly after reports from French outlet L’Equipe claimed that Guardiola met with United officials at a hotel in Paris last week to discuss the possibility of taking over from Louis van Gaal in the summer.

United have since denied any meeting between the two parties took place but you’d expect nothing less from the Red Devils as they were never going to publicly admit meeting with another manager mid-season while van Gaal is still at the helm.

City remain favourites to land Guardiola but I wouldn’t discount United from the running as the pressure has slowly been mounting on van Gaal with large sections of the United fan-base not happy with how things are progressing under the Dutchman.

There have also been reports that the Dutchman may decide to retire in the summer instead of seeing out the final year of his United contract so the club could be lining-up Guardiola in-case van Gaal walks at the end of the season.

We’ll have to keep a close eye on how things develop over the coming months but it’s going to be fascinating to see where Guardiola ends up. One thing’s for sure, he’s going to be an excellent addition to Premier League football.