Man City will look to cement their place in the top four when they take on Arsenal at the Etihad on Sunday. Here is the side we think Pellegrini will select Manchester City will look to cement their place in the top four when they take on Arsenal at the Etihad Stadium on Sunday afternoon. Here is the side we think Manuel Pellegrini will select for the game:

Goalkeeper: Joe Hart is expected once again start between the sticks this weekend.

Defence: Pellegrini is going to be forced in to at least one change at the back as Vincent Kompany has been ruled out after the skipper limped off during the early stages of Wednesday night’s defeat at Real Madrid with a groin injury.

Eliaquim Mangala is set to come in to the back four and partner Nicolas Otamendi while full-backs Bacary Sagna and Gael Clichy should face their former team as Pablo Zabaleta and Alxandre Kolarov have both been ruled out.

Midfield: Pellegrini could play Yaya Toure alongside Fernandinho in the middle of the park on Sunday despite his lackluster performance at the Bernabeu. This would see Fernando drop to the bench.

Attack: Samir Nasri is expected to play against his former side while Raheem Sterling could get a recall in attack after being a substitute against Madrid in midweek. Jesus Navas is likely to drop out while David Silva has been ruled out with a hamstring injury but Kevin De Bruyne should keep his place in attack alongside Sergio Aguero. 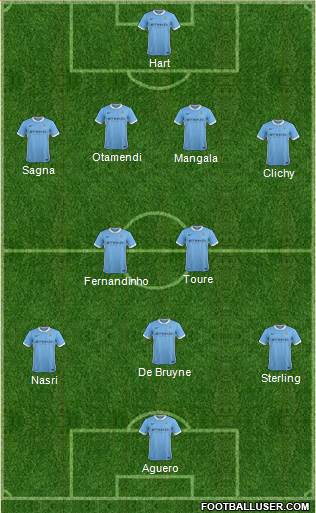