Manchester United will look to climb in to the top four when they take on West Ham at Upton Park on Tuesday night. Here is the side I think van Gaal will pick:

Manchester United will look to climb above Manchester City in to the top four when they take on West Ham at Upton Park on Tuesday night. Here is the side I think van Gaal will pick:

Defence: van Gaal rested Daley Blind against Norwich City on Saturday afternoon so the Dutchman is expected to be recalled and resume his partnership alongside Chris Smalling at the back.

Matteo Darmian is a huge doubt after being forced off through injury at Carrow Road so Marcos Rojo should revert to left-back with Antonio Valencia retaining his place at right-back.

Midfield: Marouane Fellaini continues to miss out through suspension after being hit by a three-match ban by the FA for his part in an altercation with Robert Huth last weekend.

Michael Carrick is likely to keep his place in the middle of the park but we could see Morgan Schneiderlin brought in to offer more protection in front of the back four with Ander Herrera left out. Bastian Schweinsteiger will miss the rest of the season with a knee injury.

Attack: Juan Mata scored the winner last time out after being recalled to the starting eleven so the Spaniard should keep his place in attack but Anthony Martial has been ruled out after suffering a hamstring injury in the warm up at the weekend.

Marcus Rashford was left out as a precaution against Norwich so the youngster should come back in against the Hammers with Wayne Rooney offering support. Memphis Depay could keep his place ahead of Jesse Lingard after a decent showing against Norwich. 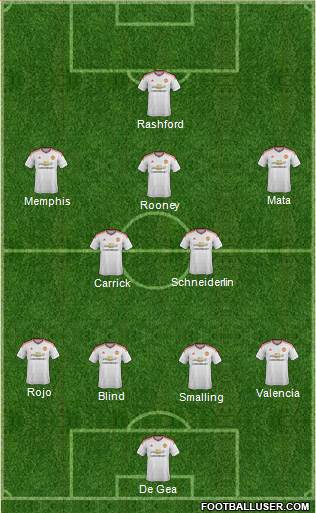