Lets Hope For A Win Against Fulham To Lift The Gloom 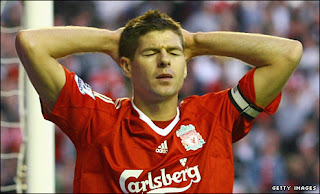 Following the defeat at Newcastle and Wednesday’s dull draw with Utrecht, lets hope for a good win against Hodgson’s old team Fulham at Anfield tomorrow evening.

The beleaguered Liverpool Manager must rally his team to put on a good performance against Mark Hughes side. Fulham lie in 17th place in the Premier League on 16 points, but they are no pushover as many teams have found playing against them this season.

Liverpool are expected to play their strongest possible team at Anfield tomorrow with Torres, Miereles, Kuyt, Maxi and Lucas all returning to the side.

The situation with Steven Gerrard is less certain with the Captain still recovering from that hamstring injury picked up on International duty five weeks ago.
I hope the skipper is fit to start the game as we have badly missed his energy and driving runs from midfield of late.

Let us hope also that Fernando Torres gets back to scoring goals for us again. The Spaniard has had a poor start to the season by his own very high standards and he needs to get a goal to kick-start his and Liverpool’s season in earnest.