Man Utd will kick off their campaign with a tricky trip to Bournemouth on Sunday afternoon. Here is the side I think Jose Mourinho will pick for the game:

Premier League football returns this weekend and Manchester United will kick off their campaign with a tricky trip to Bournemouth on Sunday afternoon.

Defence: Chris Smalling is unavailable as he serves a one-game suspension after being sent off in last years FA Cup final. Summer signing Eric Bailly has impressed in pre-season so I expect the young Ivorian international to be given his Premier League debut and is likely to be joined by Daley Blind at the back.

Luke Shaw will start at left-back as he looks to kick-start his United career following a nasty leg break last season while Antonio Valencia is favourite to start at right-back ahead of Matteo Darmian and Timothy Fosu-Mensah.

Midfield: United have been hit by an unexpected blow with the news that world record signing Paul Pogba isn’t able to make his debut this weekend after the FA confirmed he’ll serve a one-game ban that’s been carried over from his time with Juventus.

Michael Carrick is expected to keep his place in the holding role and I think Mourinho could start Ander Herrera ahead of Morgan Schneiderlin and Marouane Fellaini in the middle of the park. Bastian Schweinsteiger won’t be in the squad as he’s been told he’s free to find a new club this summer.

Attack: Zalatan Ibrahimovic is set to make his first appearance in the Premier League while Wayne Rooney is expected to be deployed in the No.10 role behind the Swedish sensation.

Summer signing Henrikh Mkhitaryn is likely to be on the bench as he gets time to acclimatise to English football with Jesse Lingard keeping his place after scoring an excellent goal in the Community Shield. Anthony Martial should keep his place on the left-side of attack. 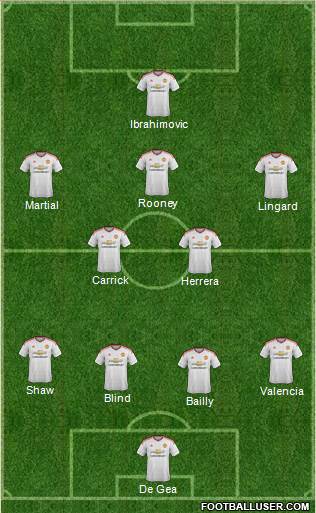