Players from Liverpool, Tottenham and Chelsea have been named in the WhoScored? Premier League Team of the Week for gameweek 4 of the new season.

Players from Liverpool, Tottenham Hotspur and Chelsea have been named in the WhoScored? Premier League Team of the Week for gameweek 4 of the new season.

Spurs dominate the team with three representatives following the north Londoners impressive 4-0 victory over Stoke City at the Bet365 Stadium on Saturday afternoon.

Attacker Hueng-min Son continued his resurgence after helping himself to a well taken brace and the South Korean international makes the cut along with left-back Ben Davies and goalkeeper Hugo Lloris after they put in excellent displays to secure a clean sheet.

Liverpool also put four past defending champions Leicester City at Anfield on Saturday evening with Sadio Mane putting in another excellent performance to earn a score of 9.55 and a place in the TOTW.

Chelsea were made to come from behind to salvage a 2-2 draw against Swansea City on Sunday afternoon with Spanish international striker Diego Costa scoring both goals for Antonio Conte’s side at the Liberty Stadium and he understandably makes the cut up front thanks to a score of 8.82.

Romelu Lukaku is the star player this week after he ended his goal drought with a hat-trick for Everton against Sunderland on Monday night to earn a week-high score of 9.65 while Man City duo Nicolas Otamendi and Kevin De Bruyne are also named in the TOTW following their performances during a 2-1 win at Man Utd. 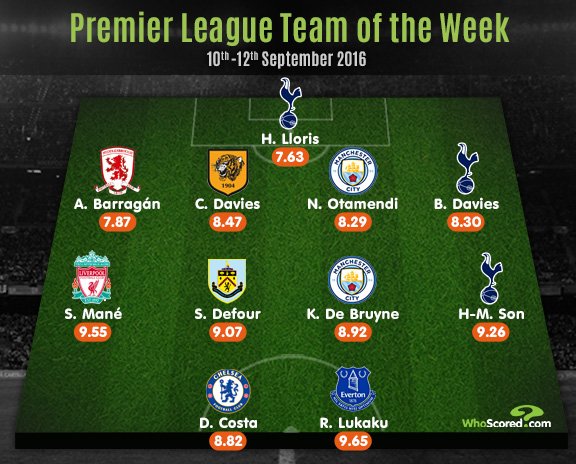