Tottenham entertain Sunderland at White Hart Lane on Sunday afternoon. Here is the side we think Mauricio Pochettino will select for the game:

Tottenham will look to get over their disappointing Champions League defeat to Monaco when they entertain Sunderland at White Hart Lane on Sunday afternoon. Here is the side we think Mauricio Pochettino will select for the game:

Goalkeeper: Hugo Lloris returned to the starting eleven against Stoke last weekend after recovering from a hamstring injury and has shown no signs of discomfort so the Frenchman will continue between the sticks on Sunday.

Defence: Pochettino has confirmed that Danny Rose has once again been ruled out after failing to overcome a hamstring injury that he picked up during the international break earlier this month so Ben Davies will continue to deputise at left-back.

Midfield: Pochettino has hinted he’ll make some changes to freshen things up and I expect Victor Wanyama to get a recall after being left on the bench against Monaco in midweek.

The Kenyan international should partner Eric Dier in the middle of the park – although Mousa Dembele is back in contention after completing his suspension last weekend. Attack: Mousa Sissoko could make his full debut for the club by replacing Erik Lamela in attack while Pochettino may decide to try Harry Kane behind Vincent Janssen as he did earlier in the season.

Christian Eriksen should keep his place in attack but Dele Alli and Hueng-min Son may see themselves dropping to the bench if Pochettino does end up mixing things up. 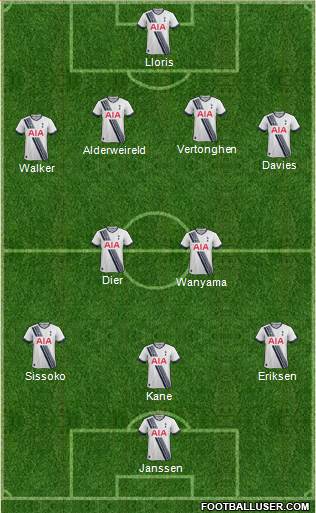