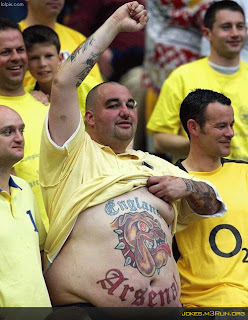 It has been more than half a decade since our big ‘arsed’ neighbours won a silverware but still the big mouthed gooners manage to live in their past glory which they proudly claim as ‘history’! The most immense insult they make against Chelsea is that ‘The Chels don’t have a history’. Oh Baby! I read bundles and bundles of history books, I’ve read about ancient empires which ruled the world but now is nowhere to be seen! America is one of the newly born countries and today they are the super power! – This is the reality, but Arses won’t agree, they still claim the old ‘Roman Empire’ is the greatest because it has history! Don’t laugh, it’s improper to laugh at the insane, they need extra care!

Now let us see about another big insult the gooners throw at Chelsea. They call us a ‘Buying Club’ – and this is what I call “le grand mensonge”; The Big Lie! Let us have a look at the current Arsenal Squad :

Out of this 24 only 6; Fabregas, Carlos Vela, Wilshere, Djourou, Gibbs & Szczesny have started their Senior Career at Arsenal, All others were bought from elsewhere mostly from France after the players have started their Senior Career with another club. Even those six who started their senior careers at Arsenal were bought from other clubs when they were young as youth players. Fabregas from Barcelona, Vela from Guadalajara, Wilshere from Luton Town, Djourou from Etoile Carouge, Gibbs from Wimbledon and Szczesny from Legia Warszawa.

When Chelsea signed youngsters for the academy, especially in the issue of Kakuta we saw many Arses talking rubbish and labeling Chelsea as a ‘buying club’ so where did they get all these guys from? Every time Chelsea wins a trophy, they throw away the sportsmanship and insult Chelsea as ‘Buying Trophies’ but they do the same. When Ballack came on a ‘Free’ to Chelsea they still claimed it as buying thus the same applies to Chamakh too.

I am not going to agree with the lame argument that buying a player at 16,18 & 20 is not ‘actual buying’ and buying a player at 25, 28 & 30 is ‘actual buying’ – these are lame excuses, and unfair arguments. If you are a real home grown club, bring on your local lads from North London, train them, play them and try to win with them. If you are such a club then I shall welcome you calling Chelsea a ‘buying club’ but what you do now is cowardice born from jealousy.

Many of you would have heard about the Goebbels’ Theory on the Big Lie. “If you tell a lie big enough and keep repeating it, people will eventually come to believe it.” This is what mostly the Arses and the other teams did so far against Chelsea by demeaning Chelsea as a ‘buying club’ whereas they too do the same but try to create a pseudo-impression that they are superior to Chelsea.

BEWARE ARSES AND CO! We will bounce back soon! 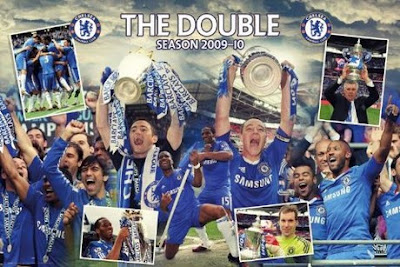