Liverpool will be looking to keep the pressure on at the top when they take on West Brom at the Hawthorns. Here are the confirmed teams for the game:

Liverpool will be looking to keep the pressure on at the top of the table when they take on West Brom at the Hawthorns on Saturday evening.

Goalkeeper: Loris Karius has started the last three Premier League games including Monday’s draw with Man Utd and Klopp hinted today the German will retain the gloves this weekend.

Defence: James Milner has been declared fit and available for selection despite being forced off at Anfield earlier in the week with a head injury so the versatile midfielder should retain his place ahead of Alberto Moreno at left-back.

Dejan Lovren showed no signs of discomfort last time out after recovering from a groin injury so he’ll continue at centre-back alongside Joel Matip while Nathaniel Clyne should once again start at right-back.

Midfield: Klopp confirmed a huge injury boost with the news that Georginio Wijnaldum is back in training and should be in contention to make his return at the Hawthorns after recovering from the hamstring injury that kept him out of the United game.

Adam Lallana is also pushing for a start after recovering from his own injury concern and came off the bench last time out but Emre Can would feel unfortunate if he was to drop to the bench – although Jordan Henderson is certain to keep his place in the side so Can seems the most likely to miss out.

Attack: The return of Lallana and Wijnaldum to the side could see Philippe Coutinho move back to the left wing which would push Roberto Firmino back in to the central striking role. That would see Daniel Sturridge drop out as Sadio Mane is almost certain to keep his place in the starting eleven. 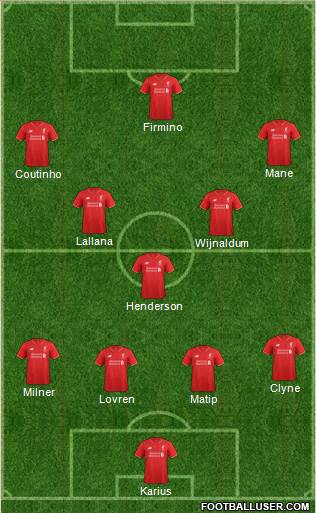