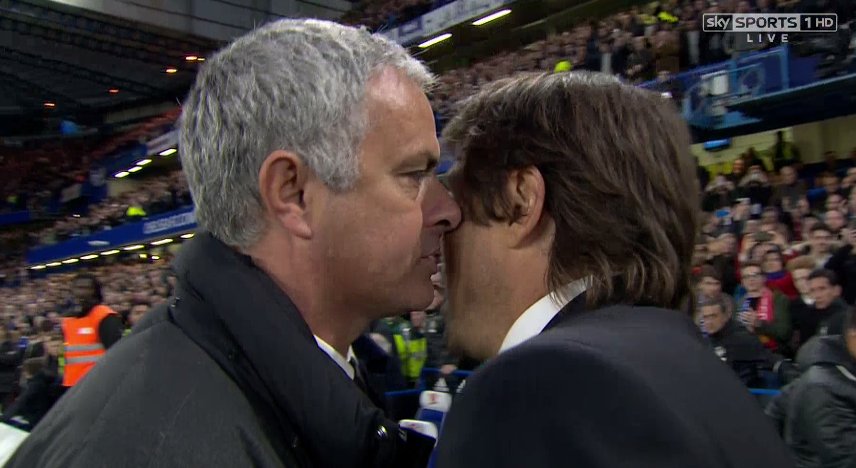 Jose Mourinho was involved in a touchline spat with Antonio Conte following Chelsea’s 4-0 victory over Manchester United which spilled over in to the tunnel after the game, according to the Mirror.

Conte was as animated as ever on the touchline throughout the game and passionately celebrated each of the four goals but it seems his antics didn’t go down too well with his opposite number.

As the two managers shook hands at the final whistle, Mourinho can be seen having words with Conte and the Mirror claim that the former Chelsea boss was furious with how the Italian tactician acted after the fourth goal.

The newspaper says that Mourinho angrily accused Conte of trying to humiliate him after whipping the Stamford Bridge crowd in to a frenzy after Kante’s goal. Speaking in Italian, the Mirror claim Mourinho said:

The spat then apparently spilled over as the two teams headed down the tunnel with the Mirror reporting that an angry row broke out between the two sets of coaching staff after a member of Mourinho’s backroom refused to shake Conte’s hand.

It was certainly a feisty affair on Sunday and it sets things up nicely for the reverse fixture when United welcome Chelsea to Old Trafford in mid-April 2017.

Check out videos of Mourinho’s exchange with Conte and the Blues boss celebrating after the fourth goal.

Just what did Mourinho whisper to Conte after the match?https://t.co/wU2mRw2bsF #MOTD2 https://t.co/4nTMQ83MNv

How did this rustle Mourinho, even lepers have thicker skin than him https://t.co/Pyc2dHoIne