Arsenal take on Paris Saint-Germain at the Emirates on Wednesday night. Here is the side we think Arsene Wenger will select for the game:

Arsenal will look for the win they need to secure top spot in Group A of the Champions League when they take on Paris Saint-Germain at the Emirates on Wednesday night.

Goalkeeper: Petr Cech is set to drop back to the bench as Wenger has made David Opsina his Champions League goalkeeper for the group stages of the competition.

Defence: Hector Bellerin continues to miss out as he’s expected to be sidelined for around a month with an ankle injury so Carl Jenkinson is favourite to keep his place at right-back after putting in a solid display at Old Trafford on Saturday.

Shkodran Mustafi should once again start alongside Laurent Koscielny in the middle of defence but I think we might see Kieran Gibbs recalled with Nacho Monreal dropping to the bench.

Midfield: Santi Cazorla is still not back in contention as he continues to nurse an Achilles injury but I think Granit Xhaka will get a recall with Mohamed Elneny dropping out. The Egyptian international struggled alongside Francis Coquelin against Man Utd so Xhaka is expected to get a recall tomorrow night.

Attack: Aaron Ramsey was selected out wide at the weekend but it didn’t really work so it looks like the Welshman may drop back to the bench with Alex Iwobi pushing for a recall. Alex Oxlade-Chamberlain is also in contention after making a superb impact off the bench last time out but Iwobi might just get the nod.

Theo Walcott and Mesut Ozil should keep their places in attack but Wenger will have a decision to make over Alexis Sanchez as it’s not clear whether he’s completely over his hamstring problem.

However, the Chilean superstar appeared to show no signs of the injury he was carrying against United so I think we’ll see him once again leading the line tomorrow night meaning Olivier Giroud will have to make do with a substitute’s role again – despite scoring off the bench at the weekend. 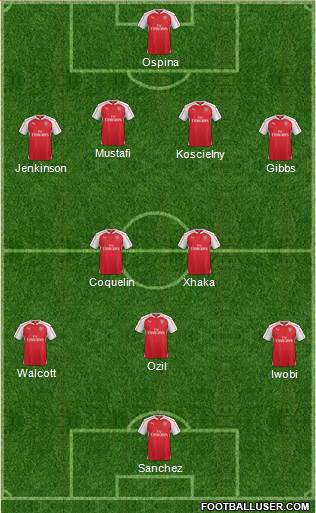