Will Conte Make Changes To His 3-4-3? Predicted Chelsea XI To Face Man City

Chelsea take on Manchester City at the Etihad Stadium on Saturday lunchtime. Here is the team we think Antonio Conte will pick for the game:

Chelsea will look to tighten their grip at the top of the Premier League table when they take on Manchester City at the Etihad Stadium on Saturday lunchtime.

Defence: The Blues will be without skipper John Terry as he’s been ruled out with a muscle injury while it remains to be seen whether Kurt Zouma will be deemed ready to make his return to the first team squad after building his fitness with the under-23’s in recent weeks.

Either way, Conte is unlikely to tinker with a settled back three that has performed so well for him in recent weeks meaning Cesar Azpilicueta should continue alongside David Luiz and Gary Cahill at the back.

Midfield: Cesc Fabregas has been an unused substitute in Chelsea’s last two games against Middlesbrough and Manchester City after recovering from injury so the Spaniard will be hoping for some action this weekend. However, I can’t see Conte making any changes to his midfield so expect to see Nemanja Matic and N’Golo Kante retain their places.

Victor Moses has been in superb form since forcing his way in to the Chelsea starting eleven so there is no reason he shouldn’t keep his place on the right while Marcos Alonso will continue on the left.

Attack: Willian is pushing for a recall to the starting eleven after making his comeback off the bench last weekend but Pedro has been in fine form in recent weeks so I think we’ll see the Spaniard keep his place in attack.

Eden Hazard is certain to start as long as he doesn’t pick up any injury before Saturday’s game and the Belgian ace will once again support in-form striker Diego Costa. 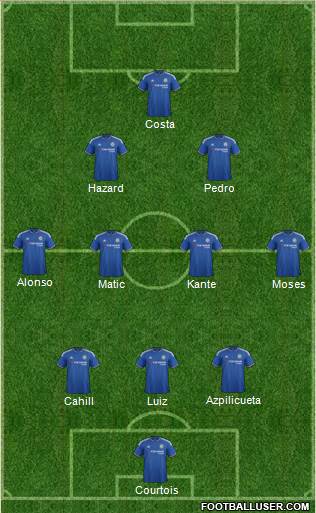