Chelsea will take on Hull City at Stamford Bridge on Sunday afternoon. Here is the team we think Antonio Conte will pick for the game:

Chelsea will be looking to cement their position at the top of the table with a win when they take on Hull City at Stamford Bridge on Sunday afternoon.

Goalkeeper: Thibaut Courtois is almost certain to keep his place between the sticks with Asmir Begovic’s future at the club uncertain following reports linking him with a move away this month.

Defence: Conte is fully expected to stick with his settled back three meaning Cesar Azpilicueta should once again line-up alongside David Luiz and Gary Cahill at the back this weekend.

Kurt Zouma is pushing for a place in the starting eleven after getting himself back to full fitness following a serious knee injury but the Frenchman will probably have to make do with a place among the substitutes on Sunday.

John Terry returns from suspension but the skipper has fallen out-of-favour under Conte this season and a place among the subs is the best the 35-year-old can hope for.

Midfield: Conte may decide to freshen things up in midfield as he doesn’t need two holding midfielder at home to Hull so he may take the opportunity to give Cesc Fabregas a run out in the middle of the park.

N’Golo Kante is almost certain to keep his place as he’s been a key figure in Chelsea’s team since joining from Leicester City in the summer so Nemanja Matic  may be the one to make way.

Attack: All eyes will be on Diego Costa to see whether he gets a recall to the side following a turbulent time for the Spanish international striker that saw him involved in a bust-up with Conte in training at the start of last week.

Costa reportedly complained of having a back injury, despite the club doctors giving him the all-clear, and Conte sided with his medical staff amid rumours of the striker having his head turned by a mega offer from China.

However, Costa has been told he’s staying at Stamford Bridge until at least the end of the season and he’s settled his difference with Conte so we could see him back in the eleven on Sunday.

Willian could be the man to make way as Eden Hazard is certain to keep his place while Pedro has been in excellent form in recent weeks. 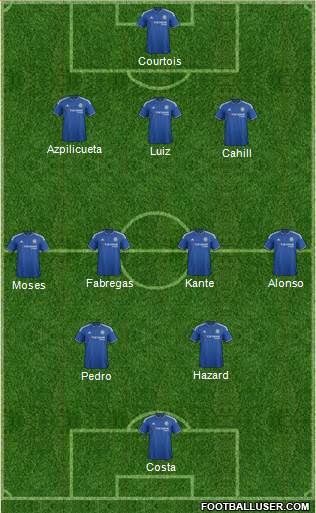 If watching the likes of Chelsea, Tottenham Hotspur and Liverpool battling for the title has whetted your appetite, why not grab your mates and a ball and get down to your local Goals arena to see if you can unleash your inner Diego Costa?