Chelsea take on Arsenal at Stamford Bridge on Saturday afternoon. Here is the team we think Antonio Conte will pick for the game:

Chelsea will be looking tighten their grip at the top of the Premier League table when they take on Arsenal at Stamford Bridge on Saturday afternoon.

Goalkeeper: Thibaut Courtois is almost certain to keep his place between the sticks as he’s Chelsea established No.1.

Defence: There are rumours circulating that David Luiz could be a doubt as the Metro are reporting that the Brazilian international is nursing a niggling knee injury that he’s been carrying since the start of December.

However, Luiz himself has said he’s managing the pain by restricting his training schedule so I fully expect he’ll line-up in a familair back three along with Cesar Azpilicueta and Gary Cahill this weekend.

That means skipper John Terry will have to make do with a place on the bench where he’s likely to be joined by Kurt Zouma.

Midfield: Conte has no fresh injury worries to contend with in midfield but we could see Cesc Fabregas get a recall as Nemanja Matic wasn’t at his best during the midweek 1-1 draw at Liverpool.

Fabregas will be desperate to play against Arsenal and will be keen to impress against his former side so Conte may opt to play the Spaniard alongside N’Golo Kante in the middle of the park.

Victor Moses should keep his place on the right-wing while Marcos Alonso is likely to start despite having a difficult time on the left wing on Tuesday night at Anfield.

Attack: Eden Hazard is the other player who is a doubt for Saturday’s game after he limped out of the 1-1 draw at Liverpool, however, the injury is only believed to be a minor one so I fully expect the Belgian international to face Arsenal.

Diego Costa is certain to lead the line once again but it will be interesting to see who Conte goes with in the final position in attack. Willian started at Anfield but Pedro has been in excellent form of late so I think we’ll see the Spaniard come back in on Saturday. 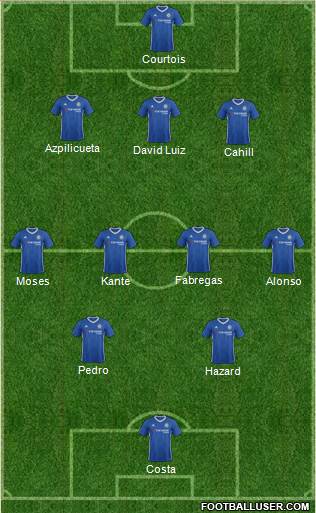 Chelsea are the favourites to win the game but as the midweek results showed us its always difficult to predict results in the Premier League and that’s where Odinbet comes in….