Arsenal take on Manchester City at Wembley on Sunday afternoon. Here is the side Gooner Mac thinks Arsene Wenger will select for the game:

Arsenal will look to book their place in the final of the FA Cup when we take on Manchester City at Wembley on Sunday afternoon.

Goalkeeper: Petr Cech made a successful return to the starting eleven during our 2-1 win at Middlesbrough on Monday night and with David Ospina still out with a back injury, the Czech star is expected to get the nod ahead of youngster Emiliano Martinez.

Defence: Wenger made a shock decision to switch to a 3-4-3 at the Riverside but he’s hinted it was just a temporary move and I wouldn’t be surprised to see the boss revert to his preferred 4-2-3-1 on Sunday.

That would see Hector Bellerin returning at right-back with Rob Holding the man most likely to drop out despite his solid display against Middlesbrough.

Nacho Monreal will no doubt keep his place ahead of Kieran Gibbs on the left while Gabriel is set to continue alongside Laurent Koscielny in the middle of defence with Shkodran Mustafi ruled out with a thigh injury.

Midfield: Aaron Ramsey put in a solid shift last time out and the Welshman could retain his place alongside Granit Xhaka against City this weekend.

Mohamed Elneny and Francis Coquelin are other options for the boss while Alex Oxlade-Chamberlain impressed in a central role last month but I think Ramsey will keep his place.

Attack: Oxlade-Chamberlain was excellent in the right wing-back role against Boro so he deserves to keep his place, even if it means a slight shift in role for the midfielder.

Danny Welbeck missed the trip to Teeside due to a minor knock but he’s back in full training and should be in contention to return to the starting eleven which is likely to see Olivier Giroud drop out.

Alexis Sanchez and Mesut Ozil were on the score-sheet to secure the victory over Middlesbrough and we’re going to need more of their magic if we’re to book our place in the FA Cup final.

Theo Walcott is pushing for a recall but I think he’ll have to make do with a place on the bench along with Alex Iwobi. Lucas Perez remains unavailable due to a thigh injury. 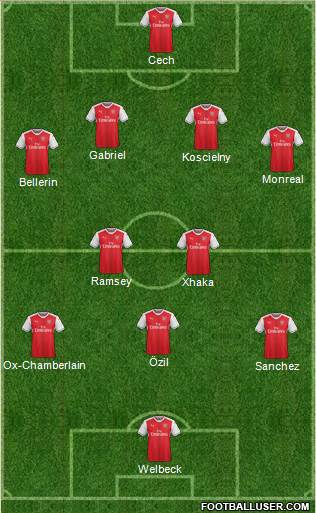