Arsenal and Chelsea have expressed their interest in signing Borussia Dortmund defender Sokratis Papastathopoulos this summer, according to Goal.

Managers are now pressing ahead with their plans for the summer transfer window so we’ll bring you all the latest news and gossip from around the globe. Today, Arsenal and Chelsea are linked with Sokratis Papastathopoulos… 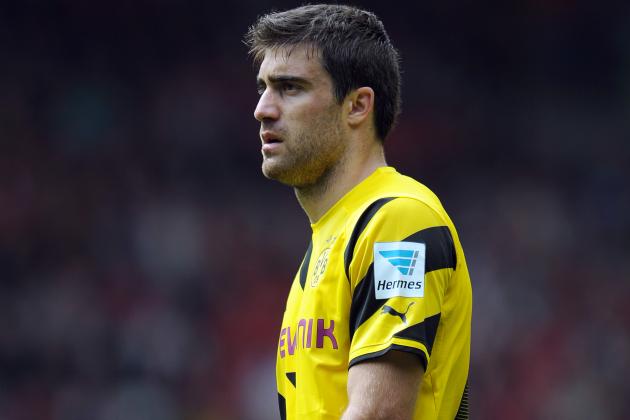 Arsenal and Chelsea have expressed their interest in signing Borussia Dortmund defender Sokratis Papastathopoulos this summer, according to Goal.

Papastathopoulos joined Dortmund from Werder Bremen in 2013 and has been an important player having racked up over 150 appearances in all competitions to help them win two domestic cups over the past four years.

However, the centre-back is yet to lift the Bundesliga title as Bayern Munich have won the league in each of the last four seasons and Dortmund ended up finishing a huge 18 points adrift last season.

Speaking at the end of the campaign, Papastathopoulos hinted he may be tempted to leave Dortmund this summer as he feels time is running out for him to start winning major pieces of silverware.

The 29-year-old is quoted as saying by the Express:

“I want to play until I’m 33 or 34 but I have not thought about whether this will be here or elsewhere. After the end of the season there is enough time to think about the future.

“There is something I have been missing. If you are young, you have a lot of time to get something, but I’m no longer young, I’ve got a lot of time for myself – and I really want to win a title.

“However, it is too early to talk about the new season. In the summer, so much can happen, players go, players come.”

These comments have seemingly alerted Arsenal and Chelsea as Goal claim the duo have now expressed their interest in signing the Greek international this summer.

Dortmund are under no immediate pressure to sell as Papastathopoulos still has two years left to run on his contract but the report says the centre-back is open to the idea of moving to England if a deal can be agreed.

Arsene Wenger is looking to strengthen his squad after missing out on the top four and the Arsenal boss could be in the market for a new defender after switching to a 3-4-2-1 formation during the closing stages of last season.

Antonio Conte is definitely in need of a new centre-back to replace John Terry and while Goal suggest that the Chelsea boss has more ambitious targets ahead of the Dortmund star, he still retains an interest in signing Papastathopoulos.

We’ll have to wait and see if anything develops over the coming weeks but I think the Dortmund defender would be a solid addition to either squad if Arsenal or Chelsea could get a deal agreed this summer.