Manchester United entertain Crystal Palace at Old Trafford on Saturday afternoon. Here is the team I think Jose Mourinho will pick for the game:

Manchester United will look to continue their excellent start to the season when they entertain Crystal Palace at Old Trafford on Saturday afternoon.

Goalkeeper: David De Gea is expected to once again start in goal with Sergio Romero making-do with a place among the substitutes.

Defence: Phil Jones is set to return after missing last night’s win in Moscow so the England international is likely to partner Eric Bailly in the middle of defence.

Antonio Valencia is also expected to get a recall at right-back with Matteo Darmian tipped to move across to the left side of the back four. Daley Blind, Victor Lindelof and Chris Smalling are all likely to make way.

Midfield: United still have problems in midfield as Paul Pogba continues to miss out with a hamstring injury while Michael Carrick missed the win over CSKA Moscow with a knock.

Marouane Fellaini will also miss this weekend’s action due to an ankle injury that he picked up during the win at Southampton last weekend so Ander Herrera should continue alongside Nemanja Matic in midfield.

Attack: Anthony Martial staked his claim for a regular starting spot with another impressive display last night that saw him score one and set-up two others against Moscow.

However, Mourinho could still decide to rotate the French international with Marcus Rashford coming back in on the left side of attack while Juan Mata is expected to return after being left out in midweek.

Henrikh Mkhitaryan should retain his place in attack while Romelu Lukaku will be looking to continue his sensational form having scored another brace last night. 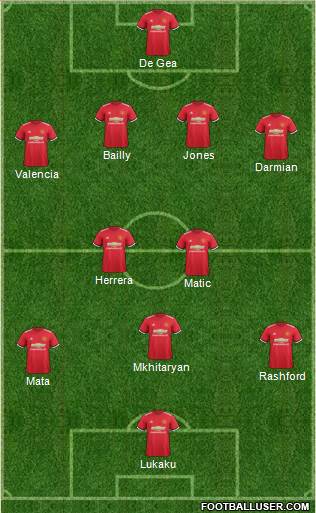