Liverpool play the first leg of their Champions League last-16 clash with Porto on Wednesday. Here is the side I think Jurgen Klopp will select for the game:

Liverpool will be looking to bring home a positive result from the first leg of their Champions League last-16 clash with Porto on Wednesday night.

Goalkeeper: The Reds boss has rotated his keepers in Europe this season but he refused to confirm that Simon Mignolet would be recalled tomorrow night so I think Loris Karius will keep his place between the sticks.

Defence: Joe Gomez will be assessed tomorrow ahead of the game after recovering from injury but Klopp has hinted the youngster will be available. If Gomez is passed fit, then I think he could replace Trent Alexander-Arnold at right-back.

Alberto Moreno is pushing for a recall at left-back but it will be tough to leave out Andrew Robertson as he’s played well in his absence so the Scottish international could retain his place.

Ragnar Klavan is back in contention after recovering from a thigh problem but Joel Matip is likely to start alongside Virgil van Dijk so Klavan will have to make do with a place on the bench alongside Dejan Lovren.

Midfield: Klopp will be forced in to at least one change in midfield as Emre Can is suspended so Jordan Henderson is set to be recalled in the middle of the park.

James Milner is also pushing for a recall but I think Klopp may stick with Gini Wijnaldum and Alex Oxlade-Chamberlain after they performed well during the 2-0 win at Southampton at the weekend.

Attack: I don’t expect there to be any changes in attack as the preferred trio of Mohamed Salah, Sadio Mane and Roberto Firmino were all at their devastating best once again at St Mary’s.

Salah and Firmino in particular were excellent so Klopp will surely stick with his best attack for this vital Champions League game meaning the likes of Dominic Solanke, Adam Lallana and Danny Ings will once again have to make do with places on the bench. 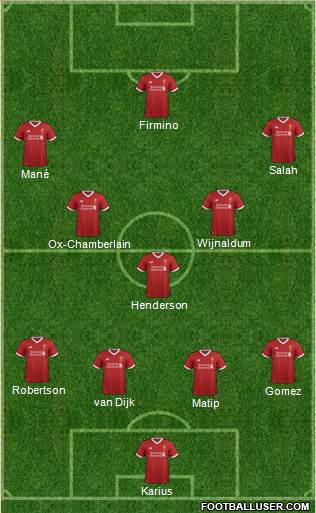