Arsenal welcome West Ham to the Emirates Stadium on Sunday afternoon. Here is the side I think Arsene Wenger will select for the game:

It’s sure to be an emotional day as Arsene Wenger takes charge of his first game since confirming he’ll leave Arsenal at the end of the season with West Ham visiting the Emirates on Sunday.

Goalkeeper: David Ospina is fully fit again and I think he might be recalled for the Europa League semi-final so Petr Cech could keep his place between the sticks this weekend.

Defence: Wenger has been resting Laurent Koscielny in our recent league games and I think he’ll do so again on Sunday so Calum Chambers could move in from the right to play alongside Shkodran Mustafi.

Rob Holding would be the man to make way with Hector Bellerin recalled at right-back while Sead Kolasinac could come in to give Nacho Monreal a rest ahead of the Madrid tie.

Midfield: Aaron Ramsey hasn’t been in full training this week to protect a nasty cut on his leg and although Wenger says the Welshman is available for selection, I think he’ll start on the bench.

Jack Wilshere is also a doubt due to an ankle knock that forced him to miss the Newcastle defeat so Mohamed Elneny could once again start alongside Granit Xhaka in midfield.

Attack: Pierre-Emerick Aubameyang is expected to keep his place in attack as he’s ineligible to play in Europe but Alexandre Lacazette could be rested ahead of the Atletico clash as he’s certain to lead the line up front in that match.

Mesut Ozil was rested against Newcastle and he was sorely missed so I think he could come in on Sunday with youngster Joe Willock dropping out following his full league debut.

Alex Iwobi could keep his place in attack despite a frustrating game at St James’ Park while Danny Welbeck may get a recall after being named on the bench against the Magpies.

Henrikh Mkhitaryan is back running after recovering from a knee ligament injury and although this game will come too soon, the Armenian international has a chance to be fit for the Europa League first leg. 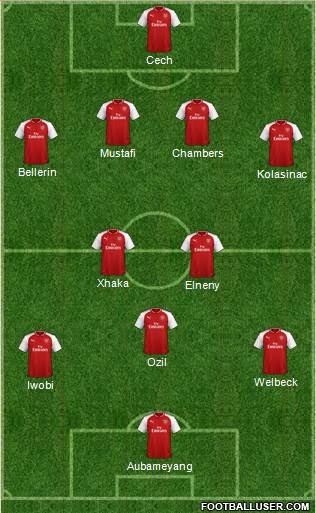