Manchester United take on Chelsea in the FA Cup final at Wembley tomorrow. Here is the team I think Jose Mourinho will pick for the game:

Manchester United will be looking to end the season with a piece of silverware when they take on Chelsea in the FA Cup final at Wembley tomorrow.

Goalkeeper: Mourinho rested David De Gea for their final Premier League game last weekend so the Spaniard will get a recall tomorrow with Sergio Romero dropping out.

Defence: United are expected to make plenty of changes to the defence with Chris Smalling set to come back in while Antonio Valencia is almost certain to start at right-back with Matteo Darmian and Marcos Rojo making way.

Eric Bailly and Victor Lindelof will be hoping to start but Phil Jones could be given the nod alongside Smalling while Ashley Young should keep his place at left-back ahead of Luke Shaw.

Midfield: Nemanja Matic was given a well earned rest for the win over Watford last week so the Serbian international is set for a recall against his former club tomorrow.

Ander Herrera has played his way in to Mourinho’s first team plans in recent weeks so the Spaniard should start alongside Matic with the fit-again Marouane Fellaini having to make do with a place on the bench.

Mourinho has already confirmed Michael Carrick won’t play any part in the game after making his final appearance last weekend so Paul Pogba should complete the three-man midfield with the Frenchman playing in front of Matic/Herrera.

Attack: Mourinho has said he will give Romelu Lukaku every chance to prove his fitness after he missed the last three games with an ankle injury that was picked up against Arsenal.

Lukaku has been receiving treatment in Belgium over the past two weeks but returned to training on Tuesday and I think the 27-goal striker will be fit to start up front.

Marcus Rashford could therefore make way despite scoring the winner against Watford last time out while Alexis Sanchez should keep his place in the attack.

Antony Martial has been declared fit after recovering from a knee injury that kept him out of the Watford game but Jesse Lingard is favourite to start alongside Sanchez and Lukaku. 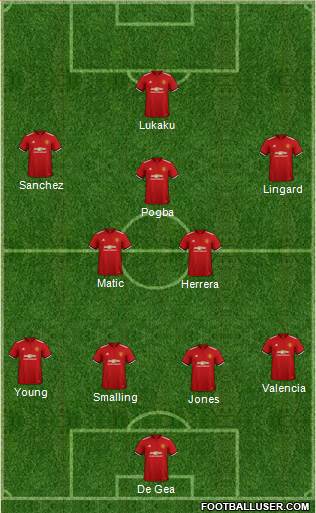