Tottenham take on Brighton at the Amex Stadium on Saturday evening. Here is the side we think Mauricio Pochettino will select for the game:

Tottenham will be desperate to get back to winning ways when they take on Brighton & Hove Albion at the Amex Stadium on Saturday evening. Here is the side we think Mauricio Pochettino will select for the game:

Goalkeeper: Tottenham will continue to be without first choice goalkeeper Hugo Lloris as the French international is still nursing a thigh injury that’s kept him out of the last three matches so Michel Vorm will remain in goal.

Defence: Pochettino’s risk of leaving Toby Alderweireld and Kieran Trippier at home against Inter Milan back-fired as they conceded two late goals to slump to a disappointing Champions League defeat in Italy.

I expect Alderweireld will be recalled alongside Jan Vertonghen at centre-back with Davinson Sanchez dropping out while Trippier should replace Serge Aurier at right-back this weekend. We could see another change in the back four with Danny Rose coming in for Ben Davies at left-back as Pochettino continues to rotate his full-backs.

Midfield: Moussa Sissoko is back in full training after recovering from a hamstring injury that’s kept him out since August but a place on the bench is the best he can realistically hope for against Brighton.

Vcitor Wanyama and Harry Winks are pushing for recalls after being named on the bench at Inter but I think we might see Mousa Dembele keeping his place alongside Eric Dier in the middle of the park with Christian Eriksen deployed in a deeper playmaker role.

Attack: Dele Alli has returned to full training after recovering from a hamstring injury that’s kept him out since the international break earlier this month but Pochettino insists he won’t rush the attacking midfielder back too soon.

Therefore, Alli may have to make do with a place on the bench against Brighton this weekend with Heung-min Son keeping his place in attack despite the South Korean looking jaded against Inter.

Harry Kane has also not looked 100 percent so far this season but the England international is still expected to lead the line up front once again this weekend. Lucas Moura was unfortunate to find himself on the bench on Tuesday night so he should be recalled in place of Erik Lamela after enjoying an excellent start to the new campaign. 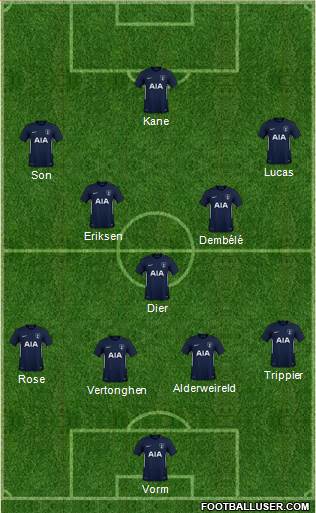