Arsenal take on Brentford in the third round of the Carabao Cup on Wednesday night. Here is the side Gooner Mac thinks Unai Emery will select

Arsenal will be looking to avoid an upset when they take on Brentford in the third round of the Carabao Cup at the Emirates on Wednesday night. Here is the side Gooner Mac thinks Unai Emery will select for the game:

Goalkeeper: Petr Cech was excellent against Everton at the weekend but he’s expected to be given a breather with Bernd Leno handed another chance to impress between the sticks.

Defence: Emery is expected to make wholesale changes to his starting eleven so we should see Stephan Lichtsteiner coming in for Hector Bellerin at right-back while Rob Holding should make a start in the middle of defence after impressing off the bench on Sunday.

Sokratis is a doubt after limping off against Everton with a dead leg so he won’t be risked while Dinos Mavropanos has been ruled out for a month with a groin injury so Shkodran Mustafi may have to feature against Brentford.

Sead Kolasinac has been back in full training this week so the Bosnian international may make his first start of the season if he’s deemed fit enough which would allow Nacho Monreal to have a well earned rest.

Midfield: We’re almost certainly going to see things mixed up in midfield with Lucas Torreira and Granit Xhaka rested following their exploits against Everton so Matteo Guendouzi and Mohamed Elneny are set to come in.

Aaron Ramsey is also expected to be rested so youngster Emile Smith-Rowe could get a chance to show what he can do from the start after impressing off the bench in the Europa League last week.

Attack: Henrikh Mkhitaryan is a doubt after picking up a knock against Everton so I don’t think the Armenian international will be risked from the start tomorrow night while Mesut Ozil is expected to be rested.

Pierre-Emerick Aubameyang and Alexandre Lacazette were both on target at the weekend but our strike duo are likely to both drop out against Brentford which will open the door for Danny Welbeck to start in attack.

Youngster Eddie Nketiah could also make a start up front after showing some superb goal-scoring form for the under-23s against this season. 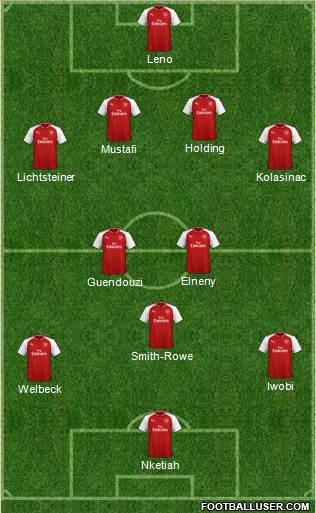