Chelsea welcome BATE Borisov to Stamford Bridge on Thursday night. Here is the side I think Maurizio Sarri will select for the game:

Chelsea will be looking to continue their 100% record in the Europa League when they welcome BATE Borisov to Stamford Bridge on Thursday night. Here is the side I think Maurizio Sarri will select for the game:

Goalkeeper: Sarri has so far resisted the temptation to rotate his goalkeepers in the Europa League so Kepa Arrizabalaga is expected to continue between the sticks with Willy Caballero once again on the bench.

Defence: However, we should see the Blues boss making changes at the back with Davide Zappacosta set to replace Cesar Azpilicueta at right-back. Marcos Alonso conducted the pre-match press conference, which is usually a good indicator that player will start, so he could keep his place at left-back ahead of Emerson Palmeiri.

David Luiz and Antonio Rudiger should be given a breather ahead of Sunday’s Premier League clash with Burnley so Andreas Christensen and Gary Cahill could be recalled in defence.

Midfield: There will also be rotation in the middle of the park as Sarri has already confirmed Jorginho will be given a rest so Cesc Fabregas is set for a recall in the deep lying playmaker position against BATE.

N’Golo Kante could also be given a well-earned rest with Ross Barkley pushing for a start. Ruben Loftus-Cheek will hope to get a run out but Sarri may opt to stick with Mateo Kovacic.

Attack: Chelsea will be without Eden Hazard as the Belgian international has been ruled out of the game tomorrow night after picking up a back injury during the 2-2 draw with Manchester United at the weekend.

Pedro should therefore be recalled in attack while Willian may get a breather ahead of the Burnley game so we could see Victor Moses handed a rare start.

Alvaro Morata has endured a tough campaign so far but I expect Olivier Giroud to start at the weekend so the Spanish forward could get another chance to bag some morale-boosting goals tomorrow night. 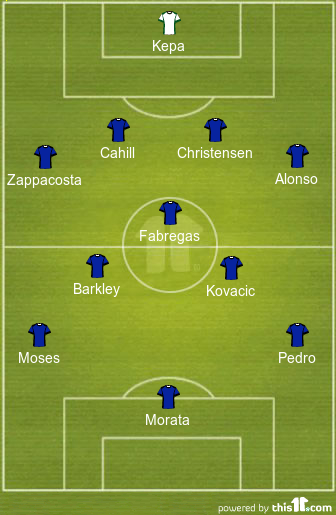