Manchester United take on Bournemouth at Dean Court on Saturday lunchtime. Here is the line-up I think Jose Mourinho will go with:

Manchester United will be looking to close-in on the top four with a win when they take on Bournemouth at Dean Court on Saturday lunchtime. Here is the line-up I think Jose Mourinho will go with:

Goalkeeper: I don’t think there can be much debate over who will start in goal as David De Gea is certain to keep his place between the sticks this weekend unless he picks up a late injury. Sergio Romero will once again be on the bench.

Defence: Antonio Valencia could be back in contention after missing the last three matches with a mouth problem but Mourinho may opt to stick with Ashley Young at right-back while Luke Shaw should continue at left-back.

Victor Lindelof and Chris Smalling have become Mourinho’s favoured pairing in the middle of defence this season so I think they will continue at the back meaning Eric Bailly will have to make-do with a place among the substitutes.

Midfield: It remains to be seen whether Marouane Fellaini will be back in contention having missed the last few matches with a groin injury that he sustained while away on international duty last month but Nemanja Matic is expected to keep his place in midfield.

Paul Pogba missed his penalty against Everton last weekend but was fortunate to convert the rebound and the French international is certain to keep his place in the middle of the park so the likes of Ander Herrera and Scott McTominay will have to battle for places on the bench.

Fred started against Everton last weekend but I think the Brazilian international may drop out on Saturday with Mourinho opting to deploy Juan Mata in a more central role against Bournemouth.

Attack: Alexis Sanchez was back on the bench last week after struggling for form and fitness this season and I don’t think the Chilean international will be recalled to the starting eleven just yet.

However, Romelu Lukaku could be back in the side after being dropped against his former club last weekend. The Belgian hitman hasn’t found the back of the net in his last nine appearances but he’ll be desperate to break his duck at Dean Court.

Jesse Lingard is pushing for a recall after recovering from injury so if he returns in attack it would mean Marcus Rashford dropping out as Anthony Martial is expected to keep his place in the front three.

The Frenchman has been in fine form of late and scored a superb goal against Everton last Sunday so I think Martial will keep his place on the left side of the United attack. 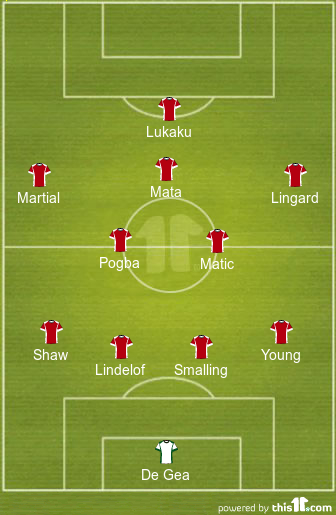