Man Utd will be looking to bring home a positive result when they take on Juventus in Turin on Wednesday. Here is the line-up I think Mourinho will pick

Manchester United will be looking to bring home a positive result when they take on Juventus in Turin on Wednesday night. Here is the line-up I think Jose Mourinho will go with:

Goalkeeper: There won’t be much debate over who’ll start in goal for United as David De Gea is certain to line-up between the sticks tomorrow night unless he picks up a late injury. Therefore, Sergio Romero will once again be on the bench.

Defence: Antonio Valencia could be back in contention after recovering from a minor muscle injury that kept him out of the win at Bournemouth on Saturday. The Ecuadorian trained on Tuesday and made the trip to Turin but he’s still lacking match fitness as he hasn’t played for several weeks so he’ll have to make-do with a place on the bench with Ashley Young keeping his place at right-back.

Luke Shaw should continue at left-back and I think we’ll see Victor Lindelof once again line-up alongside Chris Smalling as that has become Mourinho’s favoured centre-back partnership. Eric Bailly and Phil Jones will therefore have to make do with places on the bench.

Midfield: Marouane Fellaini made the trip to Italy after returning to full training having missed the last five matches with a groin problem that he picked up during the October international break. He’ll be a useful player for Mourinho to have at his disposal but I think the Belgian international will start from the bench.

Nemanja Matic didn’t have his best game at the weekend but I still think the Serbian international will start in midfield with Paul Pogba also expected to keep his place yet again. However, we could see Ander Herrera brought in to provide some much-needed legs against a very dangerous Juventus side. That would see Fred dropping to the bench.

Attack: Romelu Lukaku has been left back in Manchester to nurse a muscle injury that could also keep him out of the derby at the weekend so Mourinho has a decision to make up front. Alexis Sanchez performed well through the middle at Bournemouth so the Chilean international could once again lead the line tomorrow night.

Anthony Martial continued his excellent recent form with another goal at the weekend so I expect the Frenchman to continue on the left wing but we could see a change on the opposite flank.

Juan Mata is likely to make way after a disappointing display on Saturday and while Jesse Lingard is pushing for a recall after returning to fitness, I think Marcus Rashford will be the man recalled. 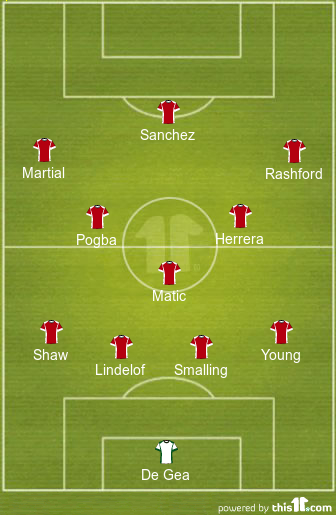