Manchester United take on Manchester City at the Etihad Stadium on Sunday afternoon. Here is the line-up I think Jose Mourinho will go with:

Manchester United will look to drag themselves back in to the title race with a win when they take on Manchester City at the Etihad Stadium on Sunday afternoon. Here is the line-up I think Jose Mourinho will go with:

Goalkeeper: David De Gea was excellent during United’s dramatic Champions League win over Juventus in midweek and there won’t be much debate over who will start between the sticks tomorrow. The Spaniard is certain to keep his place with Sergio Romero once again on the bench.

Defence: Antonio Valencia could be pushing for a recall after returning to training following a muscle injury but Mourinho has played a settled back four in recent weeks so I don’t think he’ll be in any rush to change things this weekend.

Ashley Young has been solid at right-back so I think he’ll keep his place while Luke Shaw has established himself as Mourinho’s first choice left-back this season. Eric Bailly and Phil Jones have fallen out-of-favour so they’ll be battling for a place on the bench with Victor Lindelof once again lining-up alongside Chris Smalling in the middle of the back four.

Midfield: Mourinho has been dealt a late fitness concern as Paul Pogba was forced to miss training on Friday due to a minor knock. The Frenchman will be assessed at Carrington today before a final decision over his availability is made but I think we’ll see Pogba starting tomorrow.

Marouane Fellaini made a difference after coming off the bench on Wednesday night but I think Mourinho will once again use the Belgian international as an impact substitute against City tomorrow.

Nemanja Matic should therefore continue in the holding role while Ander Herrera will be hoping he did enough to retain his place in midfield with an industrious performance in the middle of the park against Juventus.

Attack: Romelu Lukaku is expected to be back in contention after recovering from a minor hamstring injury that’s kept him out of the last two games. The Belgian international will be assessed today but as long as he’s declared fit then I think we’ll see Lukaku being recalled.

Alexis Sanchez has done reasonably well up front during Lukaku’s absence but the Chilean international picked up a knock against Juve and Lukaku offers more of a focal point so Mourinho may opt for the former Everton hitman against City.

Anthony Martial should keep his place on the left side of attack but we may see a change on the opposite flank with Jesse Lingard dropping out. Marcus Rashford is pushing for a recall but Juan Mata came off the bench to score a crucial free-kick in midweek and I think he’ll be given the nod against the defending champions tomorrow. 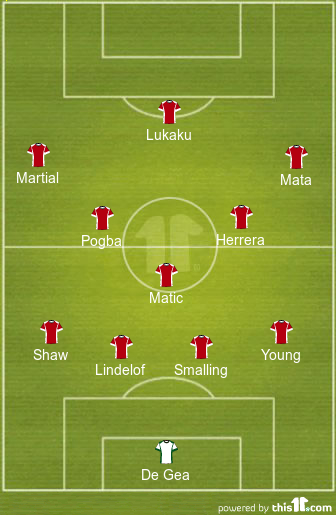