Arsenal fans have been drooling over Buyaka Saka after the teenager put in a hugely impressive display on his full debut against Qarabag on Thursday. 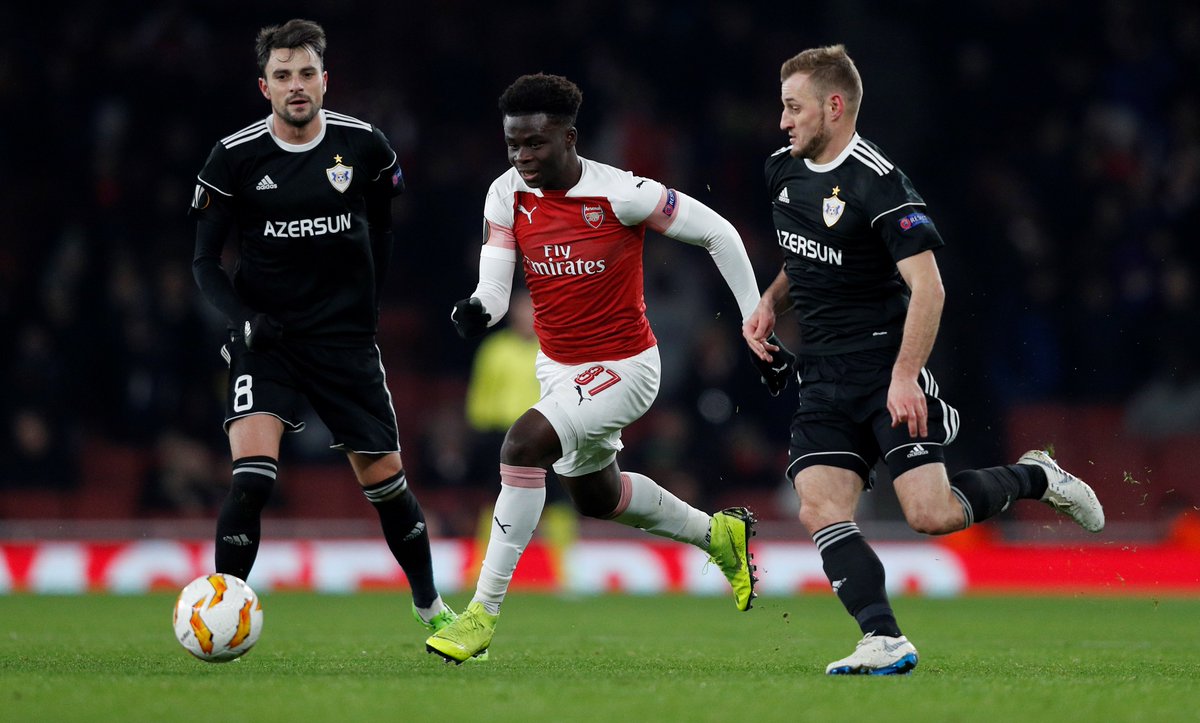 Some Arsenal fans have been drooling over Buyaka Saka after the teenager put in a hugely impressive display on his full debut against Qarabag on Thursday night.

With qualification to the Europa League knockout stages as group winners already in the bag, Unai Emery took the opportunity to rest his big guns ahead of Sunday’s trip to Southampton and give some of his youngsters a chance.

Saka was handed his full debut at the Emirates last night after making an impression off the bench against Vorskla two weeks ago and the 17-year-old certainly took his opportunity with both hands.

The tricky winger was a constant threat to the Qarabag defence and caught the eye with his directness, pace and confidence on the ball. Saka could have had an assist after Eddie Nketiah headed home his fine cross but the goal was ruled out for offside while the youngster saw a golden chance to get on the score-sheet saved in injury time.

It would have capped an excellent all-round performance and some Arsenal fans have taken to social media to hail Saka as a future star. Some supporters labelled him a ‘baller’, others feel he’s already better than Alex Iwobi and Henrikh Mkhitaryan while one fan suggested he is the ‘next Ballon d’Or winner’.

That may be pushing it slightly but Saka is certainly a huge talent and hopefully we see him given more opportunities in the first team over the coming season.

Check out what some fans have been saying about Saka on social media:

I think it’s important not to overreact but Bukayo Saka is the next Ballon d’Or winner.

Bukayo Saka is a baller! I’ve been really impressed with him tonight ???⚽️ Definitely one for the future! The future looks bright and so promising. #UEL

Saka > any Spurs player in history

Saka?? Where has he been the whole time. What a player he is! No doubt, my man of the match for this game. Kudos lad.#ARSQRB

This saka boy is a baller

Imagine Ousmane Dembele and Kylian Mbappe as a one player. That’s Bakayo Saka. ?

Saka is an unbelievably fun player to watch. The amount of talent coming out of Arsenal is absurd. So glad Emery is also giving minutes to these kids who rightly deserve them.

Looooool Saka is doing mad, he should start PL games instead of Mkhi.

Bit gutted Saka didn’t bury that chance because I thought he had an excellent game other than that.

Always willing to take people on in a pretty stale match. Shame about the offside goal that would’ve been an assist too.