Solskjaer will look to build on a dream start when Man Utd take on Huddersfield at Old Trafford on Boxing Day. Here is the line-up I think he will go with:

Ole Gunnar Solskjaer will look to build on a dream start when Manchester United take on Huddersfield at Old Trafford on Boxing Day. Here is the line-up I think he will go with:

Goalkeeper: I don’t think there will be any deliberation from Solskjaer over who’ll start in goal as David De Gea is certain to retain the gloves on Wednesday afternoon with Sergio Romero once again on the bench.

Defence: Solskjaer got off to the perfect start with an impressive 5-1 victory over Cardiff City on Saturday night but he’s said he’ll give all his players a chance over the busy festive period so I think we’ll see a couple of changes in defence.

Diogo Dalot is pushing for a recall at right-back and the youngster has been excellent whenever he’s played this season so I think he might come in for Ashley Young while Luke Shaw should keep his place at left-back.

Phil Jones put-in a far more commanding performance against Cardiff than we’ve seen from him at times in recent weeks but I still think Eric Bailly may be given a chance against Huddersfield. Chris Smalling remains a doubt with a foot problem so Victor Lindelof should keep his place.

Midfield: Paul Pogba was recalled on Saturday evening and produced one of his best performances in a United shirt. The Frenchman endured a tough time under Mourinho but he enjoyed the freedom he was given by Solskjaer and he repaid his new boss was a terrific all-round display that included two assists, so I expect Pogba to be given a run in the side.

Nemanja Matic should continue in the holding role but we may see Fred given a recall on Boxing Day. Ander Herrera put-in an industrious display against Cardiff and scored a fine goal but I think Solskjaer may want to give Fred a chance.

Attack: There’s no doubt the win over Cardiff was one of United’s best displays in recent years with the Manchester giants playing some wonderful, free-flowing football – which the fans have been craving – and it resulted in five quality goals being scored.

Romelu Lukaku could be back in contention after missing the Cardiff game while on compassionate leave but I don’t see how Solskjaer can leave out any of his front three after their goal-scoring performances in Wales.

Therefore, I expect Marcus Rashford to lead the line up front once again with Anthony Martial and Jesse Lingard keeping their places in attack after all three players scored against Cardiff.

Lukaku will be an option from the bench if he is available while Juan Mata may also have to make-do with a place among the substitutes once again. 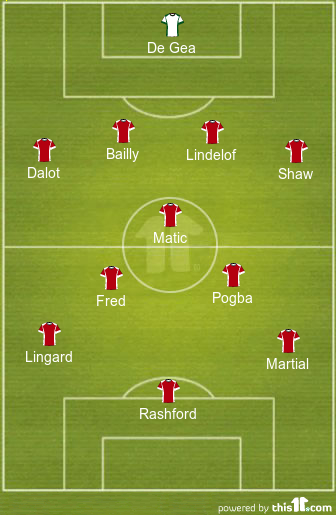