Manchester United Welcome Bournemouth to Old Trafford on Sunday afternoon. Here is the line-up I think Ole Gunnar Solskjaer will go with:

Manchester United will be looking to close-in on the top four with a win when they welcome Bournemouth to Old Trafford on Sunday afternoon. Here is the line-up I think Ole Gunnar Solskjaer will go with:

Goalkeeper: David De Gea proved once again why he’s one of the best goalkeepers in the world with a stunning save during United’s win over Huddersfield on Boxing Day. The Spaniard is certain to retain the gloves this weekend with Sergio Romero once again on the bench.

Defence: Solskjaer is expected to continue to rotate his side so Ashley Young could be given a recall at right-back with Diogo Dalot making way while Luke Shaw could once again start at left-back.

Phil Jones started alongside Victor Lindelof in midweek but Eric Bailly is pushing for a recall and the Ivory Coast international may be given the chance to impress his new Man Utd boss. Chris Smalling remains out with a foot injury that will keep him on the sidelines for at least another two weeks.

Midfield: Paul Pogba has made a superb start to life under Solskjaer and he scored another two goals during the win over Huddersfield. The Frenchman is clearly enjoying life without Jose Mourinho at the club and I think Pogba will keep his place in the middle of the park on Sunday.

Nemanja Matic got himself a rare goal on Boxing Day and we should see him continue in the holding role while Ander Herrera may be given a recall with Fred the man to make way after a rare start last time out.

Attack: Man Utd have scored eight goals in two games under Solskjaer so the Norwegian coach will be hoping that form in front of goal continues this weekend and I don’t see him tinkering too much with his front three.

Alexis Sanchez is back in training after recovering from a hamstring injury but I think this game may come too soon. Romelu Lukaku is back in contention after missing the last two games while on compassionate leave but the Belgian international may have to make do with a place on the bench.

That’s because Marcus Rashford has done well in the central striking role and I think he’ll keep his place on Sunday while Jesse Lingard should also retain his place in the Man Utd front three.

However, Anthony Martial is back in full training after missing the Huddersfield game due to illness and I think he’ll be given a recall with Juan Mata the man to make way despite an excellent performance on Boxing Day. 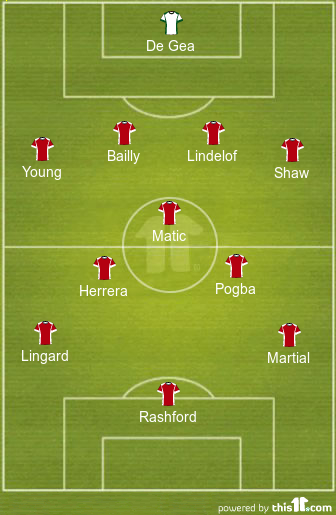