Romelu Lukaku shared a cartoon of David De Gea which summed up Sundays match in just one image. De Gea decided to shut up shop at Wembley being a Sunday, I guess. Tottenham players seemingly did believe that to be the case, trying to slot anything and everything in and around De Gea’s legs which he cleared away without any fuss. 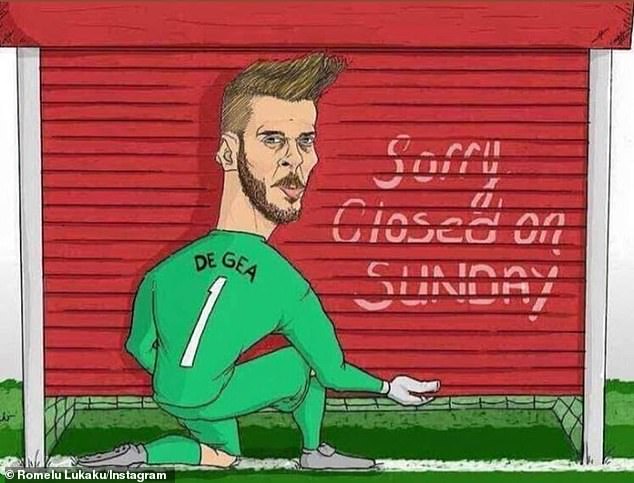 Manchester United should be thanking their faulty fax machine each day. De Gea has been the only shining light in this post Ferguson era of Manchester United. Time and time again he has drained oppositions morale with his brilliant saves thereby dragging United over the finish line.

Saving 11 shots in the second half alone, De Gea was cool as cucumber, oozing confidence and belief. Was this his is best performance in an United shirt? No. Was there any jaw dropping saves? Arguably, no. Then what makes this a special game? Well this simply was a day De Gea refused to be beaten. After making a couple of saves there seemed an aura of invincibility around him. And there wasn’t any celebration, screaming or fist pumps what so ever, he simply got on with his business as if its a game in a park nearby his house. You could see the belief draining out of Tottenham players’ faces as the match went on.

Wave after wave of attack was literally flicked away by De Gea whose positioning and use of feet to make saves simply makes him stand apart from the rest. With one of the most lethal front lines in the Premier League, Harry Kane, Dele Ali and co threw the kitchen sink at United and De Gea stopped them single-handedly. Shots from Kane’s left foot, right foot and head, Dele Ali’s right foot and head, Llorente’s left foot and Alderweireld’s right foot all went in vain.

The first half of the match was a tactical battle which surprisingly Solskjaer won. Pochettino simply wasn’t expecting a game plan of this sort from United which was simple to say the least; contain Spurs and attack them on the counter. What was impressive was how it was executed. Deploying Lingard centrally as a false nine, United were able to nullify Harry Winks from imposing himself on the game. Sissoko’s injury definitely did not help Tottenham’s cause who was tasked to manage Pogba. The Spurs bench lacked a like for like replacement and after Lamela replaced Sissoko with no one to apply pressure on Pogba, he split open the Tottenham defense with a delicious pass to release Rashford. Still requiring the end product, Rashford took a leaf out of Solskjaer’s shooting manual, stroking one past Lloris giving United the lead right before half time.

The next 45 minutes was simply a one man show, which gave United the 3 points and Solskjaer the record of being the only United manager to win all his first 6 games in charge. On any given day against any other goalkeeper, this second half performance of Tottenham would’ve been a fruitful 4-5 goal margin victory. If we had to rate De Gea’s performance it’s 11/10 purely for his sheer tenacity of refusing to be beaten. Performances like these are true testaments of world class players and such a display puts David De Gea on track to become the greatest goalkeeper in Manchester United’s illustrious history.