Arsenal have provided a team news update ahead of Saturday night’s Premier League clash with Chelsea. See the latest here 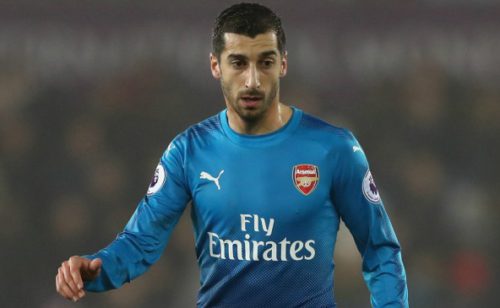 Arsenal will look to get themselves right back in the race for the top four when they welcome Chelsea to the Emirates Stadium on Saturday evening.

The Gunners have issued a team news and injury update on Arsenal.com ahead of the game including the latest on the fitness of Henrikh Mkhitaryan, Rob Holding and Danny Welbeck.

Mkhitaryan has been on the sidelines since suffering a fractured foot during Arsenal’s Carabao Cup quarter-final defeat to Tottenham over a month ago.

The Armenian international has been forced to miss the last six games in all competitions and will once again be unavailable for selection when Chelsea travel to north London this weekend.

However, Arsenal have confirmed a boost as Mkhitaryan is due to resume full training next week so the playmaker could be back in contention to face Manchester United in the FA Cup a week on Friday.

The Gunners have no fresh injuries to contend with this weekend but they’ll continue to be without Rob Holding as the centre-back is unlikely to play again this season due to a serious knee ligament injury.

Danny Welbeck is also out of the Chelsea game as the England international is unlikely to return this campaign having broken his ankle against Sporting Lisbon in mid-November.

The update on Arsenal.com said:

Henrikh Mkhitaryan
Right foot. Expected to return to full training in the next week.

Arsenal head in to the weekend action sitting fifth in the table – level on points with Man Utd  and six adrift of fourth-placed Chelsea – so Unai Emery will be desperate for a win to put them back in contention for a Champions League qualification place.