Arsenal take on Cardiff at the Emirates on Tuesday night. Here is the side Gooner Mac thinks Unai Emery will select for the game:

Arsenal will look to bounce back from their FA Cup disappointment when they take on Cardiff at the Emirates on Tuesday night. Here is the side Gooner Mac thinks Unai Emery will select for the game:

Goalkeeper: The boss is expected to recall Bernd Leno after he was given the night off during the defeat to Manchester United on Friday. Petr Cech will make way after a disappointing performance in the FA Cup.

Defence: Arsenal have huge issues to deal with in defence after losing another two centre-backs against United. Sokratis has been ruled out for around three weeks with an ankle injury while Laurent Koscielny suffered a jaw problem. The Frenchman hasn’t broken it but reports suggest he still needs surgery to remove a blood clot and he won’t be available against Cardiff.

With Rob Holding out for the season it means Shkodran Mustafi is our only fit senior central defender. Youngster Dinos Mavropanos is an option but he’s just recovered from a lengthy injury so isn’t match fit. That means Nacho Monreal could be recalled alongside Mustafi with Stephan Lichtsteiner coming in for Ainsley Maitland-Niles at right-back. The youngster will be disappointed with his performance against United so Emery may give Lichtsteiner a chance with Sead Kolasinac keeping his place at left-back.

Midfield: We could see us return to a diamond midfield that worked well against Chelsea with Lucas Torreira and Granit Xhaka expected to keep their places while Matteo Guendouzi may get a recall after being named on the bench against United.

Attack: Mesut Ozil was a second half substitute during the FA Cup defeat on Friday night but he made very little impact so I don’t see Emery recalling him to the starting eleven tomorrow night.

Aaron Ramsey could keep his place in the attacking midfield role after a couple of solid performances over the past two games which means Ozil will have to make do with a place on the bench.

The switch in formation could see Alex Iwobi make way with Emery returning to two up front after we deployed Pierre-Emerick Aubameyang on the wing against United.

The Gabon international got on the score-sheet during the defeat but he’s far more comfortable playing up front so I think Arsenal will be confident enough at home against Cardiff to play Alexandre Lacazette alongside Aubameyang tomorrow.

Henrikh Mkhitaryan is back in training after recovering from a fractured foot but he’s still lacking match fitness so a place on the bench is probably the best he can hope for. Danny Welbeck remains out with a broken ankle. 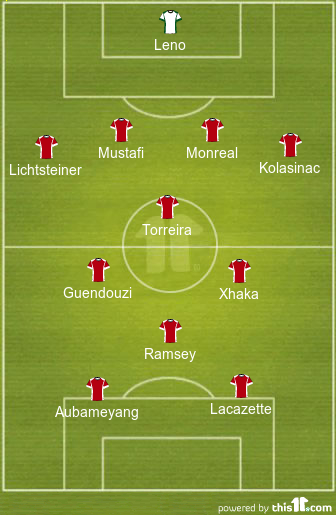