Manchester United take on Burnley at Old Trafford on Tuesday night. Here is the line-up I think Ole Gunnar Solskjaer will go with:

Manchester United will look to keep the pressure on the top four with a win over Burnley at Old Trafford on Tuesday night. Here is the line-up I think Ole Gunnar Solskjaer will go with:

Goalkeeper: David De Gea was rested for the 3-1 FA Cup victory over Arsenal on Friday night so the Spaniard is expected to be recalled with Sergio Romero making way despite his sold performance at the Emirates.

Defence: Chris Smalling could be back in the squad after recovering from a foot injury but he may be named on the bench as Solskjaer is unlikely to rush him back. Phil Jones has been in decent form lately and he could be recalled alongside Victor Lindelof with Eric Bailly the man to make way.

Luke Shaw made a successful return to the side against Arsenal after missing the win over Brighton due to illness. Ashley Young could be given a rest so youngster Diogo Dalot may be given a chance to impress against Burnley at right-back.

Midfield: Solskjaer has gone with a settled midfield since taking over and while he may be tempted to freshen things up tomorrow night, I think we’ll probably see a familiar trio on show.

Nemanja Matic should once again start in the holding role in front of the defence with the resurgent Ander Herrera keeping his place after some excellent performances in recent weeks. Paul Pogba continued his superb recent form with a top class display at Arsenal so he’s expected to start once again meaning Fred will have to make-do with a place on the bench.

Attack: Anthony Martial came off the bench to score the third goal against Arsenal after being given a rest from the starting eleven but I think the Frenchman will be recalled tomorrow.

Alexis Sanchez marked his return to the starting line-up with a goal against his former side but I still think he’ll make way with Martial returning on the left side of the United attack.

Jesse Lingard continued his excellent form with a superb goal-scoring performances at the Emirates so I expect he’ll keep his place ahead of Juan Mata – although he’ll probably move back to the wing after playing in a ‘false 9’ role at Arsenal.

Romelu Lukaku did a terrific job on the right side of the attack against the Gunners and set-up a couple of the goals but I think we’ll see him dropping to the bench with Marcus Rashford recalled up front. 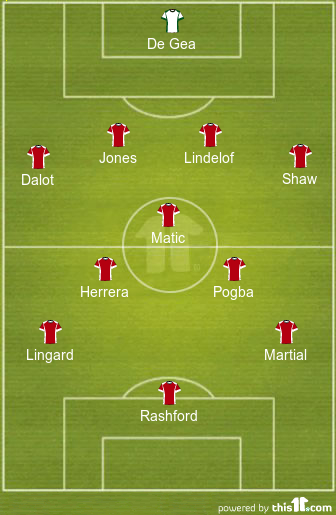