This is our match preview ahead of Arsenal’s Europa League clash with BATE Borisov including team news, expected line-ups and prediction

Arsenal will look bring home a positive result from the first leg of our Europa League last-32 clash with BATE Borisov this evening – 5.55pm kick-off.

We warmed up for the game with a 2-1 victory over Huddersfield Town on Saturday which has kept us right in the mix for a top four finish in the Premier League but winning the Europa League also represents a realistic way of qualifying for the Champions League next season.

Arsenal breezed through the group stages of the competition after winning five and drawing one of our six games to progress as Group E winners and be drawn to face Belarus champions BATE in the first knockout round.

Obviously Arsenal are the firm favourites to progress but this could be a tricky test in freezing conditions so Unai Emery has urged his players not to take anything for granted this evening.

We’ll take on a BATE side that will include former Arsenal attacker Alexandre Hleb but they may not be at their best today as they’ve not played a competitive fixture since December.

Arsenal will be without Mesut Ozil as the playmaker hasn’t travelled to Minsk for the game despite returning to full training following illness while Aaron Ramsey also misses out after only recently recovering from a knee problem.

Sokratis is ahead of schedule in his recovery from an ankle injury but the defender isn’t risked tonight so he remains out along with long-term absentees Rob Holding, Hector Bellerin and Danny Welbeck.

Emery has taken a strong squad with him for today’s match with Granit Xhaka back in contention after recovering from a groin injury while Denis Suarez is pushing to make his full debut.

The Arsenal boss may freshen things up with Petr Cech expected to start in goal while Stephan Lichtsteiner may come in on the right. Alexandre Lacazette might be given a breather with Pierre-Emerick Aubameyang fit to return up front after overcoming illness. 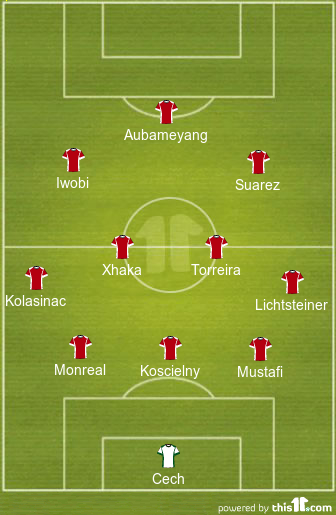 BATE 1-3 Arsenal: We won both group stage games against BATE in the Europa League last season – scoring ten goals in the process – so we should be confident this evening. Our defence has been woeful this campaign so no doubt we’ll give them every chance to score a goal but I think Arsenal will have far too much firepower at the other end. I’m going for a 3-1 away win.