Here is our match preview ahead of Arsenal’s Europa League clash with BATE Borisov including team news, expected line-ups and prediction

Arsenal will be looking to turn the tie around when we welcome BATE Borisov to the Emirates for the second leg of our Europa League last-32 clash this evening.

It was a disastrous first leg in Borisov as we produced one of our worst performances of the season to slump to an embarrassing 1-0 defeat having struggled to create many clear-cut chances against the Belarusian minnows.

It was a far cry from the side that scored ten goals past BATE over two group stage games under Arsene Wenger last season so Unai Emery is under huge pressure to not only turn the tie around tonight, but also do it with some style.

Arsenal haven’t played since the defeat last Thursday so we should be well-rested but the first leg defeat means Emery can’t afford to rest any key players ahead of Sunday’s Premier League clash with Southampton.

Arsenal striker Alexandre Lacazette is suspended after being sent off during the later stages of the first leg so Pierre-Emerick Aubameyang is expected to be recalled to lead the line up front.

Aaron Ramsey is back in contention after recovering from a knee injury that’s kept him out of the last two matches while Sokratis is also set to return to the squad after overcoming an ankle injury.

Ainsley Maitland-Niles missed training on Wednesday due to illness so he’ll face a late fitness test. Stephan Lichtsteiner is on stand-by to deputise at right-back if the youngster misses out.

Mesut Ozil is pushing for a return after not being included in the squad last week but Rob Holding, Hector Bellerin and Danny Welbeck all remain out with long-term injuries. 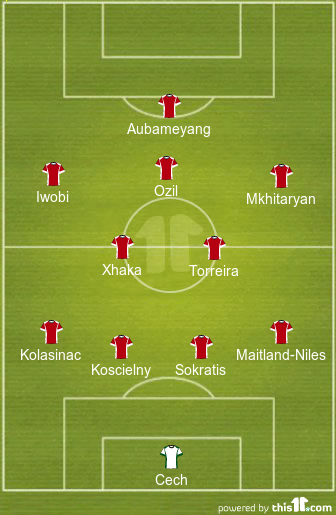 Arsenal 3-0 BATE: Arsenal won this fixture 6-0 last season and BATE have lost three of their four trips to England [they beat Everton in 2009] so this really should be a comfortable night’s work. The problem is we aren’t playing well and are struggling to create going forward. I fancy Ozil to change that if he starts but even without the German playmaker you’d like to think we can easily beat BATE at home.