Here is our match preview ahead of Liverpool’s Premier League clash with Burnley including team news, line-ups and prediction

Liverpool will be looking to keep the pressure on Manchester City at the top of the table with a win over Burnley at Anfield on Sunday afternoon.

The Reds were held to a frustrating 0-0 draw by Everton in the Merseyside Derby at Goodison Park last weekend which left them sitting second in the table – one point behind City – heading into this weekends action.

The leaders beat Watford this evening to extend their advantage to four points so Liverpool are under pressure to respond tomorrow by beating Burnley to move back to within just one point of Pep Guardiola’s men.

Jurgen Klopp will come up against Sean Dyche for the first time since the pair clashed following the reverse fixture at Turf Moor back in December which saw Joe Gomez suffer a fractured leg during a 3-1 Liverpool win.

The managers insist the situation has been forgotten but Burnley won’t be going to Anfield to make up the numbers as they desperately need a positive result with the Clarets sitting just two points above the relegation zone.

Liverpool will make a late decision over the involvement of Dejan Lovren after he returned to full training following two months out with a hamstring injury but the Croatian international is unlikely to be risked from the start.

James Milner is expected to be fit despite picking up a muscle problem last week while Joe Gomez is hoping to make his comeback after the international break having stepped-up his recovery from a fractured leg.

Alex Oxlade-Chamberlain also stepped-up his return with a run out for the Liverpool U23’s on Friday after recovering from a knee ligament injury but he won’t be involved against Burnley tomorrow.

As for the visitors, they’ll be without Steven Defour after he underwent surgery on a serious calf injury while Aaron Lennon is out with a knee problem. 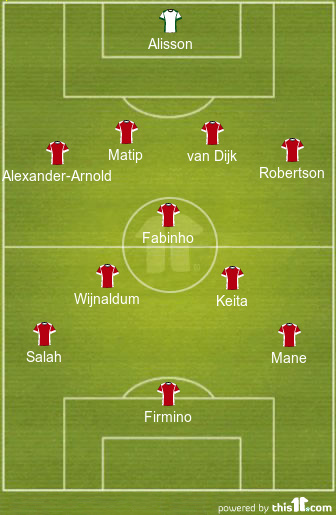 Liverpool 3-0 Burnley: This is a big game for Liverpool and they’ll be confident of getting the three points they need as they’ve won nine of their last 11 home games against Burnley in all competitions. The Reds are also unbeaten in their last 35 Premier League home games and I don’t see that record being under threat tomorrow. I predict Liverpool to secure a routine win.