Chelsea will be looking to close-in on the top four with a win over Everton at Goodison Park on Sunday. Here is the side I think Maurizio Sarri will select

Chelsea will be looking to close-in on the top four with a win over Everton at Goodison Park on Sunday afternoon. Here is the side I think Maurizio Sarri will select for the game:

Goalkeeper: Kepa Arrizabalaga is back in favour following his bust-up with Sarri in the League Cup final last month so I expect the Spaniard to keep his place in goal ahead of Willy Caballero this weekend.

Defence: The Chelsea boss is expected to make some changes to his back four with Cesar Azpilicueta set to be recalled following his rest during the resounding Europa League victory over Dynamo Kyiv on Thursday night. Davide Zappacosta will make way at right-back.

David Luiz is also expected to come back in to the side at the expense of Andreas Christensen with Antonio Rudiger keeping his place in defence. Marcos Alonso will hope he’s done enough to keep his place after scoring and grabbing a superb assist against Kyiv but Emerson Palmeiri is pushing for a recall at left-back against Everton.

Midfield: Sarri gave Jorginho a breather against the Ukrainian’s on Thursday night so he should be recalled in the deep lying playmaker position this weekend while N’Golo Kante should retain his place in the middle of the park.

Mateo Kovacic started last time out but I think we’ll see Ross Barkley recalled on Sunday while Ruben Loftus-Cheek will probably have to make-do with a place on the bench despite his positive showing against Kyiv.

Attack: Chelsea will make changes in attack with Eden Hazard almost certain to be recalled after he was rested in the Europa League. Callum Hudson-Odoi showed his immense talent once again with a superb performance last night but the youngster is still expected to drop out on Sunday.

January signing Gonzalo Higuain missed the trip to Kyiv due to illness and it remains to be seen whether the Argentinean international will be fully fit to take on Everton this weekend.

However, Sarri may opt to stick with Olivier Giroud even if Higuain is fit after the Frenchman scored a superb hat-trick during Chelsea’s 5-0 rout over Kyiv on Thursday night so he could keep his place against Everton.

Willian started in the Europa League tie but Pedro seems to be just ahead of the Brazilian international in Sarri’s pecking order so he may be recalled this weekend. 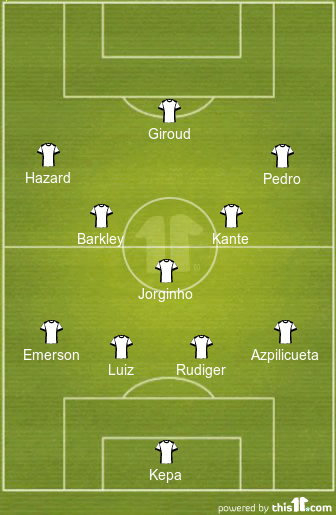