Tottenham take on Huddersfield at the New Tottenham Hotspur Stadium on Saturday. Here is the side we think Mauricio Pochettino will select

Tottenham will be looking to cement their place in the top four with a win over Huddersfield at the New Tottenham Hotspur Stadium on Saturday. Here is the side we think Mauricio Pochettino will select for the game:

Goalkeeper: Hugo Lloris made a crucial penalty save against Manchester City in midweek and the Frenchman is almost certain to keep his place tomorrow afternoon.

Defence: The Tottenham boss is likely to rest a few players ahead of next week’s huge Champions League return leg against City so Jan Vertonghen could be given a well-earned breather in defence. Davinson Sanchez is pushing for a recall so the Colombian international could come in alongside Toby Alderweireld against Huddersfield.

Serge Aurier remains out with a hamstring injury that he suffered while playing for the Ivory Coast during the recent international break but Ben Davies is likely to replace Danny Rose on the opposite flank tomorrow.

Midfield: Tottenham have been dealt a blow as Eric Dier is once again ruled out with an on-going hip injury that he sustained while playing for England against the Czech Republic last month.

Harry Winks has made a successful return to action recently so he should keep his place against Huddersfield but Moussa Sissoko has played a lot of football lately so Pochettino may want to give him a rest.

Victor Wanyama is fit and available for selection so we could see the Kenyan international being given a recall to make a rare start in the middle of the park this weekend.

Attack: Tottenham have been dealt a huge blow as Harry Kane is unlikely to play again this season after suffering ankle ligament damage against Man City on Tuesday night. Pochettino hasn’t given up hope of the striker making a swift recovery to play in a potential Champions League final on June 1st but Kane is highly unlikely to play any significant part in Tottenham’s league run-in.

To make matters worse, Dele Alli broke his hand against City and while he could yet play with a protective cast against Huddersfield, Pochettino says he’s not optimistic the attacker will be available as he’s still in severe pain.

Therefore, Spurs don’t have too many options in attack as Erik Lamela remains out with a hamstring injury. Hueng-min Son is expected to start up front in the absence of Kane for the majority of matches when Alli is fit, but for now we could see Fernando Llorente leading the line up front.

Christian Eriksen should keep his place while Lucas Moura is almost certain to be recalled in attack this weekend and he could play alongside Son and Llorente if Alli is ruled out. 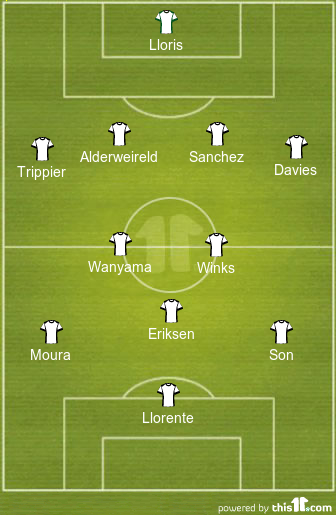